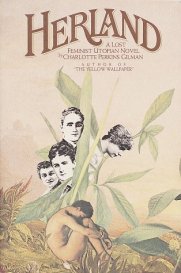 Herland, Charlotte Perkins Gilman’s feminist utopia, is based on this premise.  Written in 1915, the book is about a trio of young men who hear of an uncharted territory where only women are allowed to enter. Searching for an adventure, they fly a plane into the territory and discover a world where the men died out two thousand years ago; the women evolved and have been self-reproducing only females ever since.  The men are held captive until they can learn the women’s language and gain their trust. Once trust is established, they are encouraged to observe the way of life in Herland.

The country, populated by three million women, is the antithesis of all that symbolizes “civilized” society. It is a world where a woman’s sole purpose in life is to be a mother.  The country has had two thousand years to figure out what kind of quality of life it wants, and each generation throughout the two thousand years has made an effort to achieve that ideal.

The result is that each woman gives birth to only one child so that their small country does not become overpopulated. Plants and trees have been cultivated throughout the centuries to bear plentiful amounts of food. Crime is nonexistent, and methods to educate and entertain the children–whom everyone has a hand in raising–have been refined and tailored in ways that would best benefit them.  Respect for all living things and a desire to create a better world for future generations is what drives the women.  One of the characters explains to the men,

“Here we have Human Motherhood–in full working use…The children in this country are the one center and focus of all our thoughts.  Every step of our advance is always considered in its effect on them–on the race.  You see, we are Mothers,” she repeated, as if in that she had said it all.

Feminist utopias are always fun to read, but what struck me most about this one was how ahead of its time it was, and how relevant it remains today. The author’s commentary on the milk and meat industries could easily still be used in contemporary literature:

“Has the cow no child?” asked Somel earnestly.

“Is there milk for the calf and you, too?”

It took some time to make clear to those sweet-faced women the process which robs the cow her calf, and the calf of its true food; and the talk led us into a further discussion of the meat business.  They heard it out, looking very white, and presently begged to be excused.

I also found this book really interesting in contrast to “The Yellow Wallpaper,” Charlotte Perkins Gilman’s most famous short story, in which her protagonist, suffering from post-partum depression, slowly goes insane at the hands of her doctor’s “treatments.”  Herland offers a completely different portrait of Perkins Gilman’s views on motherhood.

My main gripe with the book is that I wish it hadn’t ended so abruptly.  There were also other aspects to the book that did make me cringe (i.e., population control involved the “undesirable elements” of society being barred from procreating).  And of course, anyone who knows me well knows that a world in which a woman’s sole purpose is motherhood is my idea of a dystopia rather than a utopia! 😉

But overall, this book is a pretty fascinating contribution to the feminist canon.