Up until this week, 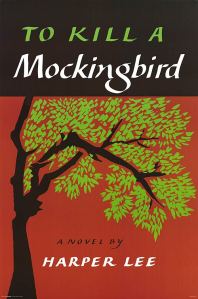 I felt I was the only person on Earth who hadn’t read Harper Lee’s To Kill a Mockingbird. It was one of my literature-related shames, having a degree in English and all (you can see all the other shameful holes in my reading on my Fill in the Gaps page).  Anyway, I knew I had to remedy this one ASAP in honor of the book’s 50th anniversary this year.  Though I’d seen the movie (many, many years ago), I only fuzzily recalled the details, so reading this was a fresh experience for me.

The book is often referred to as one of the greatest anti-racism books of all time, but I didn’t read the book that way. At all. Yes, there is a trial in which a black man gets convicted for raping a white woman, even though all evidence points to the contrary. Yes, the trial illuminated the ways of the racist South for Atticus Finch’s children. And yes, there are anti-racist lessons to be learned and overarching themes of acceptance that permeate the book.

But I still didn’t read it as a story about racism.

For one, the trial only takes up about a third of the book. The effects of the trial linger throughout the remaining third of the book, but it is not just a story about how Tom Robinson was falsely accused. No, instead I view TKAM more as a story about growing up and losing one’s innocence.  The book covers several years of Scout’s, starting from the time she’s a precocious, defensive little girl in first grade, to the point where she’s nine years old and has more of a grasp of what’s expected of her and how the world works. By the end of the book, Scout and her brother Jem have witnessed some of the hurt caused by the hateful thoughts and actions of other people, and they’ve lost much of their childish innocence.

Honestly, I loved this book. It was well written and well paced; I plowed through the last 50 pages and had to force myself not to get ahead of myself and jump to later passages. Boo Radley, they character Scout and Jem had spent all those years yearning to see, was perfect.

That’s not to say that the book is without its problems. Atticus Finch, much as I loved picturing him as Gregory Peck, was definitely rockin’ the White Savior role (though some might argue that since the book is being told through his young daughter’s eyes, he would naturally seem like a savior figure; I can accept that). There is also a point in the book where he says, “There is no more Ku Klux,” which I stared at for a while and went, “Yeahhh…no.” The black community in the novel is also kind of…off. I don’t want to say that they’re written as stereotypes, because I don’t think that’s completely the case (though they were mostly used as mere plot devices), but they do tend to fawn over Atticus in ways that play up the savior role.

Finally, I want to address this post that was published on stuff white people do, and later on Racialicious. I’d skimmed parts of it when it was first published, but I’d mostly been avoiding all TKAM articles so that I could read the book without any outside influences. Now that I’ve had a chance to go back and read it more closely, I do want to say that I disagree with pretty much everything (mostly because it criticizes the book based on various interpretations of it, rather than the book itself).

However, valid points were made about the ways that this book is taught. On the cover, there’s a statement about how librarians voted TKAM the best novel of the 20th century, and it’s easy to see why: neat themes about big topics. Put yourself in someone else’s shoes. It’s bad to hate, period. You shouldn’t be prejudiced against those who are different than you. What’s not to like about that? The lessons in TKAM are much more obvious (and much easier book to swallow) than, say, The Bluest Eye.   But if taught correctly (i.e., with supplementary materials about racism written by those who actually experienced it)–and taught in a way that doesn’t merely present racism as a bad thing that happened a long time ago to black people, but rather as something that is still alive and well now–the book still has the power to serve as a valuable tool.

To Kill a Mockingbird was first printed in 1960. I read the 50th anniversary edition from Harper Books, an imprint of HarperCollins.

2 thoughts on “To Kill a Mockingbird”