Wonderful news everyone: Da Capo Press has been gracious enough to supply a copy of Viva Vegan! for a giveaway!  This giveaway is now over. 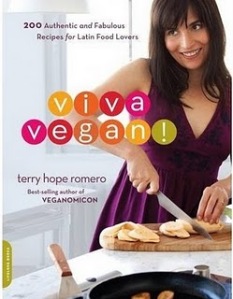 Terry Hope Romero, co-author of best-selling vegan cookbooks Veganomicon, Vegan Cupcakes Take Over the World, and Vegan Cookies Invade Your Cookie Jar, is back with a Latin food-inspired vegan cookbook.  I’m a vegetarian who always appreciates a good vegan recipe, and since I 1) am Latina, and 2) own Veganomicon and Vegan Cookies, I was muy excited to hear that Romero had created a Latin@ cookbook! Furthermore, I can’t count the number of times I’ve been told, “How can you be a Mexican vegetarian?”  To all you naysayers out there: if you think meat-free Latin food is not a possibility, prepare to have your mind blown.

As in her previous cookbooks, the first part of Viva Vegan! is devoted to acquainting the reader with the basics.  In this case, Romero explains the some of the staples necessary to stock a vegan Latin pantry.  They range from the familiar (olive oil, beans), to the fun (beer!), to the stuff that makes some people scratch their heads (what the heck is “vital wheat gluten,” you ask? Romero will talk you through it).  Almost every page in this section also contains a spotlight on specific ingredients, so if you want some more in-depth information on say, dried chiles, Romero explains what to look for and how to handle them.

The next half of Part I delves into basic kitchenware that every well-stocked kitchen should have.  For those who want to get extra fancy (or those who think they’ll be doing a lot of Latin@ cooking), Romero also lists a few other items one might want to invest in, such as a tostonera, or a churrera (for all you churro aficionados).  Still, the extent of my kitchen gadgetry amounts to an ancient food processor and a cheap blender, and they get the job done. While I may (desperately) want that shiny new KitchenAid mixer, it’s really not necessary for the recipes in this book.  Chances are, the stuff you have on hand will do just fine.

Part II is where the real fun begins: the recipes! There are fourteen(!) different sections in the cookbook: Essentials; Salsas and Condiementos; Bocadillos, Snacks, and Appetizers; Ensaladas; Beans and Rice; Tofu, Tempeh, and Seitan; Vegetables, Plantains, and Grains; One-Pot Stews, Casseroles, and Cazuelas; Soups; Arepas, Pupusas, and Tortillas; Tamales; Empanadas; Drinks; and Desserts. Each section is filled with tips (and, at times, illustrations) to make the process go smoothly.  The four appendixes are also very helpful, providing menu options, online shopping recommendations, explanations of cooking terms, and conversion charts.

As for the recipes themselves? Delicioso!

The first recipes I tried were the Wheat Empanada Dough and the Creamy Corn- Filled Empanadas.  I was a little dubious about rolling out the dough because I’m quite inept when it comes to making tortillas, but I was actually able to create the 6-inch wide circles of rolled out dough the recipe called for. 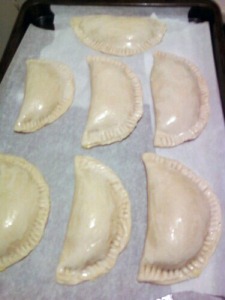 Creating the filling wasn’t too difficult either, although I recommend putting all ingredients in the blender before you start to sauté the chives and basil (which is something most people would probably do anyway…I lack common sense sometimes).  Stuffing the empanadas was a little daunting at first, but after the first couple of tries I got the hang of it. And of course, “forking” them shut was fun.  I wasn’t expecting them to be so sweet (no sugar added; corn is just naturally sweet), but they were extremely tasty. I absolutely loved munching on the bread part, too.  I will definitely be making empanadas again!

I also made Creamy Potato Peanut Stew (Guatita).  The ingredients included peanut butter and beer (?! yes!), and I garnished the end result with cilantro and avocado slices.  It was a huge hit with the (meat-eating) family: 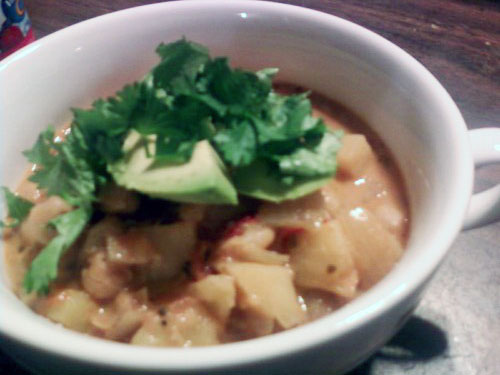 The only downside to the cookbook is that a lot of the recipes require some planning. The empanada dough, for instance, required chilled ingredients, plus at least four additional hours of chilling time. Though some of the recipes themselves aren’t time-consuming, they do take a little foresight.

Still, as with Romero’s previous endeavors, this cookbook is extremely hard not to like. She is knowledgeable and easygoing, and the book itself is easy to navigate.  I love that the book has recipes from a variety of Latin-American countries; it’s fun to see the variations inspired by different cultures.  The book does not disappoint!

*Excuse the horrible photos (I showed my mom the Guatita pic and she said, “Yours looked prettier.” Me: “That is mine.” “Oh.” lol). My camera died a while back (devastating), so I’m stuck using the camera on my outdated phone until I can afford a replacement.