As the events of House Divided unfolded, one thing immediately came to mind: this is precisely the kind of book that would give Arizona State School Superintendent Tom Horne a massive heart attack. And you know what? This in itself is a good reason to read the book.

Raul Ramos y Sanchez’s House Divided takes place in the not-too-distant future where Class H citizens–“those who were Hispanic, married to a Hispanic, or had at least one grandparent of Hispanic origin”–are forced to live in large Quarantine Zones around the United States. Rebels within the camps, led by “Mano” Suarez, try to fight for their freedom. Knowing the importance of public opinion, the Hispanic Republic of North America, as they call themselves, tries to stick to strategic attacks on the U.S. military. Meanwhile, an impatient extremist group called the Latino Liberation Front emerges in response to harsh government crackdowns, and Mano is horrified when his teenage son joins.

This is not the type of book I usually read (my attention usually strays at the first sign of military jargon), so I was surprised how quickly I became absorbed into the story; I could not put the book down. Ramos y Sanchez deftly handles the subject matter by writing about it from different points of view. The chapters are told from different perspectives, such as the rebels, the extremists, and  various government officials. While the fight for human rights at the center of the plot, the subject of family bonds is also explored in detail.

It’s also important to note the book’s relevance, given the current political climate regarding immigration and the Latin@ stereotypes perpetuated in the mainstream media. The book directly touches on this a few times. For instance, when asked why “most people picture a swarthy guy with a serape and a sombrero when they hear the word Hispanic,” a soldier in charge of patrolling one of the Quarantine Zones responds by saying that the proximity of the Mexican border influences people’s perceptions; he goes on to note the diversity of Latin America.

I have not yet read America Libre, the precursor to House Divided, but had no problem at all jumping right into the story. House Divided was truly a pleasure to read. I love books with dystopian elements, and reading one that centered on Latin@s was a particularly enjoyable experience. 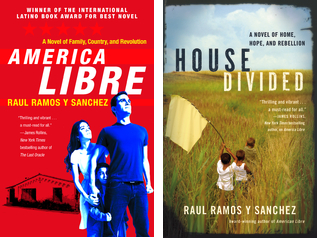 Hachette Book Group is providing a copy of America Libre and House Divided to one lucky reader! Contest closes February 13, 2011 at 5 p.m. Central time.  The winner will be randomly selected on Valentine’s Day and contacted by email. Sorry no P.O. boxes, and this is open to U.S. and Canada only.