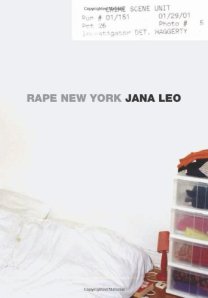 On January 25, 2001, a man entered Jana Leo’s Harlem apartment as she walked inside to put down her groceries. He “nonviolently” raped her at gunpoint, then calmly told her that he’d kill her if she went to the police.

In the months that immediately followed the rape, Leo struggled to get her life back on track. The police were of little help to her and there were times where Leo felt that they were even jeopardizing her safety. Her landlord didn’t do much to assuage her fears, either; there were several safety issues that he continually failed to address. Had he been more diligent and shown the least sign of concern, the rape might not have even occurred.

At the time of her rape, Leo had been working on her dissertation about architecture and urban planning. She couldn’t focus after the assault, but eventually began researching the links between gentrification and violent crimes and prison populations. The subject quickly becomes the focus of her dissertation research. Armed with this new information, Leo applies her findings to her own experiences, analyzing everything from the police department’s handling of her case to her landlord’s motives for mismanaging his properties in such an abhorrent manner.

Rape New York is a very short book that can be easily read in one or two sittings, but it is full of fascinating–albeit depressing–information. The scope of her information is sobering:

One out of every ten women is raped. The statistic sounds incredibly high. However, the statistical number seems to fall far below the real number. Among the women I know well enough to have shared their experiences with me, half of them said they have been raped. My friend L told me that when she was raped, the thought “here it is” came to her, as if rape is something every woman fears and expects to happen.

Likewise, the corollaries between poverty-stricken areas and crime are well-established, but Leo takes it several steps further by looking at prison populations and the locations of their home neighborhoods. She also examines the shady (and illegal) real estate practices that allow crooked landlords to exploit and gentrify impoverished areas by allowing crimes such as Leo’s assault to proliferate.

My one main qualm with the book was its tone. Leo remains detached and impassive throughout the entire book. Understandably, her adoption of this tone may be a type of emotional defense, especially when describing experiences such as the rape itself. But the entire book–including the parts that were straight-up statistical analysis–gave the feeling of being read through a thick haze. There was something off about it that I couldn’t quite put my finger on, and I think this was it.

That said, the actual contents of the book are extremely important, and I wish the book could be required reading for anyone who worked with victims of rape and other violent crimes.

If you’re interested, Jezebel posted an excerpt from the book about a week ago, though it is kind of spoilery. Some of the Jezebel commenters found the excerpt problematic without having any kind of context (I’m inclined to agree), so read at your own risk.