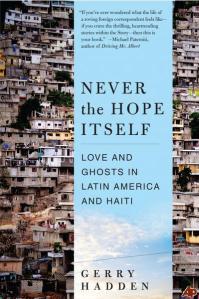 I don’t know what I was expecting before I read Gerry Hadden’s Never the Hope Itself: Love and Ghosts in Latin America and Haiti, but any preconceived notions I had about the book quickly flew out the window within the first couple of pages. Hadden was on the verge of becoming a Buddhist monk when he got an opportunity he couldn’t refuse: he was offered a job as an NPR correspondent for Mexico, Central America, and Haiti. Equal parts personal, professional, and travel memoir–with a dash of ghost story–Never the Hope Itself book serves up a number of Hadden’s riveting recollections from his eventful years in Latin America.

The world was a different place in 2000: how easy it’s been to forget that before the United States became mired in the “War on Terrorism,” its main focus was the war on drugs. Based in Mexico City, Hadden’s job was to cover the political upheavals in Haiti and the war on drugs in Colombia and other Latin American countries. Although I did recall a lot of what went on during the war on drugs, I’ll admit I was completely clueless about what was going on in Haiti ten years ago. Luckily, Hadden is a masterful storyteller, contextualizing his stories by giving the reader a brief rundown on what was happening politically at the time. It was fascinating.

Almost instantly, the war on drugs vanished and the focus shifted to terrorism. Hadden was left to his own devices, reporting on stories in Latin America while news agencies turned their attention toward the Middle East. What he uncovered were portraits of people who faced devastating hardship, yet whose stories were becoming increasingly common as a result of corrupt governments and detrimental foreign policies. He interviewed people who struggled to survive in the vast slums of (pre-earthquake) Port-au-Prince, went to the front lines of the Central American drug trade, and made the arduous journey many immigrants face as they make their way from Central America to the U.S.-Mexico border. In between assignments, he’d journey back to his (haunted) rented home in Mexico City, trying to put down roots and settle in with the love of his life, only to be sucked back into work at a moment’s notice.

Some of the most provocative parts of the book were the reactions in Mexico City in the days following September 11: people were celebrating. I was initially taken aback–as was Hadden–but the more I thought about it, the more I was able to understand where the celebrants were coming from. Mexico City has long been hotbed of artists, intellectuals, and political refugees from all over the world. And frankly, U.S. foreign policies and military interventions have had devastating effects on people all over the world.  Hadden recalls a conversation a Mexican journalist who disproved of the celebratory atmosphere:

“Here is an example. You, the master, are heading to your room with a tea service and you trip and fall, spilling everything on the floor. Before you, for your benefit, we servants will rush to your assistance. But when you are gone, behind your back, we will giggle like tickled schoolchildren. Since September 11 we’ve been giggling. And this is what shames me the most.”

Not all Mexicans were celebrating, however. Hadden also had numerous encounters with people who immediately offered their condolences upon learning Hadden was from the U.S. It was really interesting to see the wide range of unfiltered, emotionally-charged reactions.

I was a little ambivalent when I started this book; it sounded interesting, but not like something I’d sit down with for long periods of time. In fact, that’s exactly why I started reading it when I did: I was looking for a nonfiction book I could read in short excerpts while I juggled a few other books. Um…I was wrong. Once I started the book, it was the only thing I wanted to focus on. Some of the people Hadden comes across–particularly in Haiti–leave a raw, haunting impression. Never the Hope Itself is definitely a conversation-starter, and it is one of the best memoirs I have read in a long, long time.

Never the Hope Itself: Love and Ghosts in Latin America and Haiti was published by Harper Perennial, an imprint of HarperCollins on September 6, 2011.

2 thoughts on “Never the Hope Itself: Love and Ghosts in Latin America and Haiti”