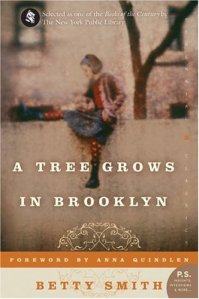 A Tree Grows in Brooklyn by Betty Smith

What it is: A coming of age novel set in turn-of-the-20th-century Brooklyn. Francie Nolan grows up in a poverty-stricken, struggling household: her beloved father is an alcoholic, and her mother clearly favors Francie’s little brother. Through all of her hardships, Francie remains inquisitive and resourceful.

Why I listened to it: I felt like the only person in the world who had never read this book.

What I thought: What a great story! Smith is a great storyteller, and Francie is a remarkable protagonist that you want to keep cheering on through good times and bad. There are a lot of years of Francie’s life packed into this novel (the reader first meets her at age 11 and sees her through high school), but by the end I felt like I really got to know her. I also loved the setting–it was a different time, and a completely different Brooklyn from the one that exists now. Yet for all its differences from today’s age, it retains a sense of timelessness. The book is a classic for a reason.

If this book were a food, it would be: vanilla birthday cake 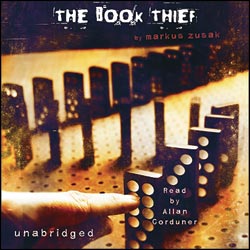 The Book Thief by Markus Zusak

What it is: At the age of nine, Liesel Meminger is sent to live with working-class foster parents in Germany. It’s a jarring experience–especially with her brash stepmother–but Leisel eventually comes to love her foster parents, especially her foster father, who teaches her how to read. As World War II creeps further to Liesel’s world, she finds herself turning increasingly to books, even if she has to steal them.

Why I listened to it: The hype. Ohhh, the hype.

What I thought: I was chagrined to find out in the first few minutes of the audiobook that the story was narrated by Death. Like, actual Death. I rolled my eyes so hard at that, and though that initial reaction lessened in its intensity as the book progressed, I don’t think I ever got past it. The writing could also be dry at times. As for the plot, I had mixed reactions. On one hand, I just wanted to give Liesel a huge hug and take her to the nearest library. On the other hand, the book also made me feel uncomfortable in ways that I couldn’t quite put my finger on. Part of it was that The Book Thief is a Good German story; I know there were a lot of good Germans who opposed the Nazis, but there were so many in this book that it gave me pause. Rules for Anchorites wrote a fantastic post that unpacked the issues of this book (I read it and kept going, “yes, yes, YES”), so I’ll just link you to her post because she does a way better job of pinpointing the problematic areas of this book than I ever could. For what it’s worth, though, I do think you’d have to be completely cold-hearted to not feel some kind of sympathy for everything Liesel goes through; I was crying by the end.

If this book were a beverage, it would be: vodka–burns as it goes down, but you still kinda like it

One thought on “Audiobook Quickies: A Tree Grows in Brooklyn & The Book Thief”