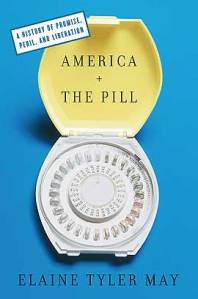 In 1960, a little pill that would revolutionize women’s lives went on the market. The availability of an oral contraceptive for women finally gave women more power explore their sexuality and prevent unwanted pregnancies. On a larger scale “the pill” was heralded by doctors, politicians, and women’s rights advocates, though not always for commendable reasons. As Elaine Tyler May shows in America and the Pill: A History of Promise, Peril, and Liberation, the pill not only held the promise of a better life for the average woman, but also sparked the interests of eugenicists and those in favor of population control.

It would be impossible to discuss the history of the pill without mentioning one of its staunchest supporters, Margaret Sanger, who is often trotted out by Planned Parenthood opponents for her eugenicist views. A longtime birth control activist who was once jailed for her defiance of the Comstock laws, Sanger believed that women should have access to contraceptives, and according to May, imagined a birth control pill as early as 1912. It wasn’t until 1950 that the dream came closer to reality, however; her friend and fellow activist Katharine Dexter McCormick offered financial support for research into a birth control pill, and the women set out to find people who could help them achieve their goals.

The research and testing leading up to the pill’s distribution also has its darker side: poor women, women of color, and institutionalized women were targeted as test subjects, a practice that was common and acceptable at the time. Later, studies on the pill’s safety were done in Puerto Rico; tests on the pill were also being performed by scientists in several different countries. Women around the world were eager for an oral contraceptive. The possibilities of an oral contraceptive were also of interest to political and health organizations around the world, who anticipated that a birth control would end overpopulation, poverty, and world hunger…quite a lot to ask of a tiny pill!

Of course, the pill did not end the world’s problems, but it did give baby boomers more reproductive control and help usher in the sexual revolution of the 1960s. The pill turned 50 years old in 2010, and today, over twelve million people are on it. And though oral contraceptives — and the women who take them — still fall under attack to this day, the wide availability of birth control is something that most people have come to take for granted (I say “most” because access to birth control is still limited for some people).

Overall, the book is enjoyable but a little too brief. May begins her first chapter with the lyrics to Loretta Lynn’s “The Pill” (shown below), and that really sets the tone for the cultural focus of the book. I did think the research could have dug deeper into certain areas; I would have loved to hear more about the scientific aspects of the pill, especially since May’s father was one of the doctors who helped develop it! Also, those who are already familiar with the history and controversies of the pill probably won’t come away with too much new information. Still, it was interesting to see the development of birth control from a purely cultural perspective, and given the growing number of political attacks on American women’s reproductive health/freedom over the past year, the book couldn’t be more timely.

America and the Pill: A History of Promise, Peril, and Liberation was released on April 27, 2010 by Basic Books, an imprint of Perseus Books Group.

2 thoughts on “America and the Pill: A History of Promise, Peril, and Liberation”