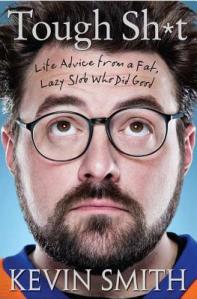 If there’s one message that writer/director/prolific podcaster Kevin Smith wants you to come away with after reading Tough Shit, it’s this: Attention slackers: you too can achieve your dreams! Drawing on his unique life experiences and the knowledge he’s accumulated over the course of his career, Smith’s latest book is like a self-help memoir that encourages readers to go after what they want in life. With his characteristic self-deprecating humor, he adamantly insists that if he can do it, anyone can.

Still interested? Good, because so was I (sometimes I have the sensibilities of a twelve year old boy), and I ended up reading the book in three sittings.

In chapters whose titles all have “shit” in them, Smith charts his humble beginnings working as a convenience store clerk in New Jersey and discovering that his dream was to be a filmmaker. Once that seed was planted, he was determined to follow through with it. The rest is history: he cobbled together Clerks on a minuscule budget, was plucked from obscurity at Sundance by the Weinstein brothers, and was offered a place in indie film heaven at Miramax. Since then, his film career has had its highs and its lows — and critics really, really do not like the man no matter what — but Smith seems to have figured out his own way to take it all in stride and work it to his advantage.

Smith is far from reticent about dishing some dirt on people he’s worked with. One of the most surprising stories was his soured relationship with the Weinsteins. Though they started out as indie darlings, they’ve long since changed, and now a lot of their films are big-money productions. This was something I was already kind of familiar with — I love early Miramax films — but I had no idea about the stuff directly relating to Smith.

Three chapters of the book are devoted to Red State. Don’t let the synopsis fool you — Michael Parks was robbed of an Oscar for that performance. Red State proved a stylistic departure from the Kevin Smith films most people are accustomed to, yet it also served as a return to his roots in terms of getting things done in full blown indie style. It was fantastic getting to read everything from the film’s conception all the way through to its controversial marketing plan.

But the chapter that people will most likely remember (and most want to read) is the one on the making of Cop-Out. Confession: I cannot stand Tracy Morgan. But even though the movie was slammed by critics, and even though I usually avoid dumb comedies like the plague, and even though it starred Tracy Morgan, I actually enjoyed this movie. A few months later I ended up randomly watching Too Fat for 40 on Netflix, and that’s when I first heard all about the making of Cop-Out. Or rather, when I first heard about what an asshole Bruce Willis was during the making of Cop-Out…which you get to read all about in Tough Shit in even greater detail. Let’s just say I have a newfound respect for Mr. Morgan’s talents (but I still don’t like him!).

Ultimately, this is a very fun (and funny) memoir. I definitely could have done without the mental picture that the first three pages created in my mind, and there was a part in the last full chapter that also created a disturbing mental picture (that, and if my dude ever divulged something like that about us, I’d kill him). But if you can get past all the juvenile joking, you’ll be pleased to see what a talented and heartfelt writer Smith is. He’s great at talking, and this book comes across like one long conversation about like that he’s having with you (and if you go the audiobook route, he really will be talking to you since he’s the narrator). Good times.

Tough Shit: Life Advice from a Fat, Lazy Slob Who Did Good was released on March 20, 2012 by Gotham, an imprint of Penguin Group.

4 thoughts on “Tough Shit: Life Advice from a Fat, Lazy Slob Who Did Good”