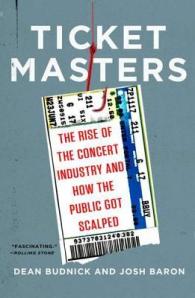 As an avid concertgoer who has done more than her share of obsessive concert-related things, one thought kept running through my mind as I delved deeper into Ticket Masters: “YOU PEOPLE SUCK.” And by “you people,” I mean pretty much anyone who has anything to do with live performances, from promoters, to ticketing companies, to scalpers, to — depressingly, though unsurprisingly — even the performers themselves.

Dean Budnick and Josh Baron give readers an in-depth, behind-the-scenes look at rock concert industry. Armed with anecdotes and interviews, the authors chart the rise behind many of the artists and corporations who helped make the concert industry what it is today, such as Ticketmaster, Live Nation, Clear Channel, and Stub Hub. They go back to the early days of ticketing, when the concept of computerized ticketing was still unheard of and people were outraged when the service fees on tickets were raised from a quarter to a whopping fifty cents (must be nice).

As technology has progressed, fans have seen corporations merge and ticket prices skyrocket. The chance of a fan getting a front row seat through regular ticketing outlets is pretty much zero. Instead, it’s possible a show to be sold out within three minutes of going on sale — *cough* Franz Ferdinand, NYC, 2007, yes I’m still bitter even though I’ve seen them three times *cough* — only to see tickets for these shows available on sites like Stub Hub minutes later. That’s because, in addition to getting more money through service charges and ticket fees, performers regularly sell the best seats in the house to scalpers, or set aside a large portion of these prized seats for expensive VIP packages or fan club sales; either way, the fans getting screwed. Though I was already aware of this practice, it doesn’t infuriate me any less. (A small list of the performers who do this: The Rolling Stones, Beyonce, Lady Gaga, Madonna, The Eagles, Katy Perry, Britney Spears, Christina Aguilera, and Shakira, just to name just a few. And yeah, probably Franz Ferdinand, too.)

Overall, I had mixed feelings about this book. On one hand, it’s fascinating to see how the concert industry has evolved. For people who go to a lot of live performances, it’s interesting to get some insight into ticket pricing (or gouging, depending on your stance). But it’s not an easy book to read. The quotes and anecdotes are interesting, but I do think the book could have used heavier editing because it felt like the authors tried to cover every single aspect in the history of the concert industry. As a result, some parts are overly-detailed and slow the book down, while some parts skimped out. For instance, it would have been nice to get some exact figures on the breakdown of current ticket prices, or at the very least some insight as to how they decide on how to price service fees. These subjects are glossed over in very general terms, with more of a focus on the early days of computerized ticketing.

Most damaging to the book, though, was the inclusion of what didn’t even need to be there — I think there’s about 100 pages scattered throughout the book that could have been removed without detracting from the authors’ investigations. For example, the first forty or fifty pages of the book is devoted to the rise of computerized ticketing. While it was nice to learn about all the companies that tried and failed, ultimately, all that really matters is the company that succeeded and crushed everyone else (Ticketmaster). If Ticket Masters were solely about the history of ticketing, that would be one thing. But it’s not: it’s about an entire industry, and the information should have been culled accordingly. Likewise, later in the book they talk in depth about ticketing at huge sporting events like the Superbowl. Really, who cares? There’s some crossover regarding the people and ideologies involved in sports marketing and concert marketing, but it’s unnecessary to devote several pages to it. Things like this kept slowing the flow of the book.

The authors do make some good points, though: with its greed and lust for more marketing opportunities, the industry as a whole is shooting itself in the foot at the expense of consumers (which people got a preview of a couple of years ago when concert sales were particularly abysmal). And it’s not just the industry: as one executive stated, people vote with their dollars, so even if they complain about hundred dollar tickets, if they’re willing to pay it, it’s obviously not too expensive. As someone who may or may not have once paid well over $100 to see Britney Spears lip synch for a couple of hours — don’t judge me, I love her — this, too, is a brutal truth to acknowledge. If nothing else, the book will leave you with no easy answers and plenty to think about the next time you’re ready to plunk down some cash on event tickets.

Ticket Masters: The Rise of the Concert Industry and How the Public Got Scalped was released on paperback on April 24, 2012 by Plume, an imprint of Penguin.

6 thoughts on “Ticket Masters: The Rise of the Concert Industry and How the Public Got Scalped”