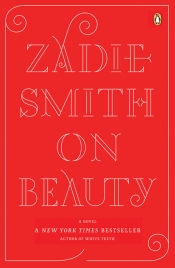 What it is: Steeped in the world of New England academia, the book follows the Belsey family. Howard Belsey is a professor who has cheated on his wife. Their three grown children are each harboring their own secrets, but everyone’s lives crash together with the appearance of the Kipps family, which is headed by Howard’s professional nemesis,  Monty Kipps.

Why I read it: It’s been on my TBR list for ages. I bought the book years ago at a library sale and it’s been sitting on my shelves ever since.

What I thought: I can’t believe I’m about to say this because I totally judge people who list it as a reason for not liking a book, but none of the characters are likeable. NONE! And that’s usually not a problem for me — in fact, I welcome insufferable / asinine / depraved / crude / rude assholes to my bookshelves! — so long as the characters are well-developed and bring something to the story. Sadly, all of On Beauty‘s characters feel like caricatures and the dialogue often sounds stilted and contrived. The clunky handling of race and class never sat right with me either (Howard Belsey is a white Englishman, his wife is black, their children are multiracial, and the Kipps family is Trinidadian). Is Zadie Smith a talented author? Absolutely. Parts of the book are gorgeous and insightful and lyrical. Other parts have just the right touch of humor at the perfect moment. But as a whole, the book was a chore. I know the book has won countless accolades, but honestly? I don’t get it.

This Beautiful Life by Helen Schulman

What it is: A novel about a New York family imploding after the teenage son is discovered at the center of a massive school scandal; he forwards a sexually explicit video made for him by another student, and the video goes viral.

Why I read it: It sounded like an interesting concept. The media periodically likes to scare the public about the evils of social networking and sexting (I hate that word!), and I was curious to see how the subject might be confronted in literature.

What I thought: This was a really uneven book for me. I think Schulman did a commendable job of exploring the complicated world of teen sexuality and the confusion that can be involved in it. I also liked that there was no “bad guy.” The girl who makes and sends the video isn’t painted as the school slut, and once the video goes viral, Schulman takes pains to illustrate a wide spectrum of student reactions. Nor is the boy who receives and forwards the video a cruel person; he makes a naive mistake and also has to deal with the consequences of his actions. Ultimately, however, the book is kind of annoying. I think a big part of that can be attributed to the audiobook narrator, who inexplicably voices everyone with a sarcastic tone. The adult characters’ actions also annoyed me; the boy’s parents, particularly the mother, are completely useless. It was frustrating.

One thought on “Quickies: On Beauty & This Beautiful Life”