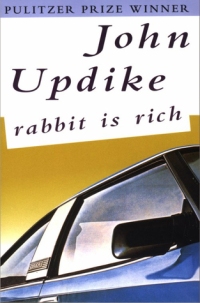 You know how sometimes you come across an artist — photographer, singer, filmmaker, author, whatever — who creates something offensive and abhorrent, who then gets all self-righteous like, “Don’t conflate the artist with the art,” but deep down you feel it that the person is really just an asshole using the I’m An Artiste and You Are a Philistine excuse to be an even bigger asshole? Yeah? Well. After two Rabbit books, a few short stories, a few interviews, and the synopsis of this book, no one will ever be able to convince me that two time Pulitzer Prize-winning Great Man of Literature John Updike wasn’t a big ol’ racist, misogynist asshole. Like, ever.

I’ve been listening to the Rabbit is Rich audiobook for the better part of a month and finally finished the last of the seventeen discs yesterday afternoon (which I immediately celebrated with this tweet). I don’t usually jump right into review writing when I finish a book — I like to let a book sit with me for a while, you know? — but this book. This book requires a different tactic. So just humor me: I decided to review the book immediately in case of the unlikely event that my hatred begins to dissipate, m’kay?

Rabbit is Rich is part of Updike’s Rabbit series, which follows Harry Angstrom through different parts of his life. I was first introduced to Harry in undergrad when I had to read the first book in the series Rabbit, Run. That book introduces Harry, aka “Rabbit,” at the height of his life: he’s a narcissistic basketball hotshot with his whole future ahead of him. Rabbit is Rich has him in middle age. He’s still narcissistic, but the great — and “great” is debatable here — Rabbit is now a cynical car salesman with a stale marriage and an college-aged son who’s well on his way to recreating his father’s idiotic mistakes. The series made Updike the poster boy of white, middle class, middle American, post-Cold War era realism.

The book is long and moves at a glacial pace. Things happen, but the pace is intentional, appropriately recreating the agonizingly non-eventful atmosphere of Harry’s day-to-day life. I get it. (It’s boring as hell, but I get it.) I also get that the characters are supposed to be shitty human beings (mission accomplished). I usually don’t care about that. But then there’s that added layer of racism and misogyny, coupled with my belief that it’s all coming from this thinly veiled place within Updike himself. Because his characters aren’t just your typical racists or sexists. Oh, no. Updike takes it up a notch, throwing references  of “high yellows,” “slum mothers,” the queers, the spics, the blacks, and the “fucking Arabs” at times for no reason at all in an insidious way that just feels off.

But my favorite — “favorite” — of all were his references to those grotesque creatures with their sagging, diseased bodies, and boner-shriveling harping, also known as “cunts.” Or whores, or bitches, but mostly cunts. And those cunts exist solely for the male gaze, be it to satisfy male pleasure or to allow men to ruminate on the female devaluation that comes with aging. As in:

A man fucks your wife, it puts a new value on her, within limits.

[T]hat’s what cunts do to you when Nature takes over: go out of control.

She seems now not merely fat and gray but baffled: straw on her sweater, hair on her cheeks. A shaggy monster, lonely.

The old bastard’s tricks have turned the little bitch on.

not to mention all the sexually explicit objectifying scenes (from which I’ll spare you). Anna Shapiro, who also argues that Updike was a misogynist, wrote in her excellent article:

It was the way he described them – us. You felt yourself squirming, wanting to pull a blanket over you, preferably lead-lined, to shield yourself from the merest stray phrase or casual observation. Not because they were sexual and incited one’s modesty. It was not like being stripped. It was like being splayed open on the examining table under the glare of medical lamps while satirical remarks were made; it was being seen looming with comic grotesqueness through a telescope; it was the most unfriendly leering by someone saying, You see? You see? How could anyone love that?

And the argument can be made that the men in the book also have apparent flaws and are subjected to ridicule. But quite frankly, that argument is utter horseshit. The men in the book — especially Rabbit — are fully formed characters with whom you can sympathize if you’re so inclined, since you’re seeing the world through their eyes. There’s a massive difference between the antihero’s point of view and his vapid little wife’s (nearly nonexistent) point of view.

I am SO OVER Updike right now. I listened to this book because I decided it was time to just suck it up and get it off my Pulitzer Project list, and I’m really bummed out that if I ever want to finish that project, I’ll have to read yet another Rabbit book because the damn things won two Pulitzers. But I WON’T LIKE IT, and I’m sure it’ll probably be another decade before I dare touch that thing.

Rabbit is Rich was originally published in 1981 by Knopf; it won the 1982 Pulitzer Prize for fiction. I listened to the audiobook version.

Correction: For some reason, I originally wrote that Rabbit’s name is Hal Angstrom. As a commenter pointed out, his actual name is Harry.

12 thoughts on “Rabbit is Rich”