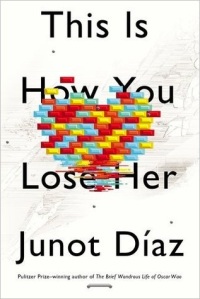 Anyone familiar with either of Junot Díaz’s previous books will remember Yunior, the Dominican kid coming of age in Drown who goes on to become the narrator of The Brief Wondrous Life of Oscar Wao. Back for his third starring role Díaz’s work, Yunior is the link connecting most of the stories in This Is How You Lose Her. People who read Oscar Wao got a chance to see how compulsively self-destructive Yunior was in his relationships with women. In This Is How You Lose Her, Yunior’s doomed relationships take center stage, as does the tenuous relationship he has with his older brother, Rafa.

It’s always an encouraging sign when someone you admire begins something by quoting someone else you very much admire. In this case, the book’s epigraph is from the Sandra Cisneros poem, “One Last Poem for Richard.” But even better, This Is How You Lose Her opens with one of my favorite short stories, “The Sun, The Moon, The Stars,” which was originally published in The New Yorker in 1999. It was written well before readers got to know Yunior in Oscar Wao, but in the story we can already see the effects of his lying and cheating as he tries in vain to earn back his girlfriend’s trust.

I had already read a few of the stories in this collection, but reading them all at once and seeing how they fit together was a wholly different experience. One of the most striking things about it was getting to see the way that Yunior’s views and his interactions with women were shaped by (and, at times, in response to) his older brother’s womanizing ways. In Drown, we got to see a little bit of what Yunior was exposed to as a child; he bore witness to his father’s philandering. With his father largely out of the picture in This Is How You Lose Her, it is now Rafa who sets the example for Yunior. While Yunior will never become the abusive person his brother is — he’s often shocked by the cruel ways Rafa treats his girlfriends — his life experiences, personal traumas, and cultural pressures all have an impact on the way he will eventually begin to treat women.

Then there’s the added layer of a cancer story: Rafa fights a losing battle with cancer during some of Yunior’s most formative years, but instead of bringing the brothers closer, Rafa shuts everyone out; the loss is something that Yunior reflects on as he gets older. However, the book’s cancer story — and I use “story” here collectively, as Rafa’s illness is subtly weaved into several of the stories — is unlike any other cancer story I’ve ever read. As with many other difficult topics Díaz has written about, Rafa’s battle provides both life-changing and flat-out hilarious moments. There are elements of levity in Rafa’s story that I just can’t see being told by anyone other than Díaz.

There is a quote in this Guardian profile where Díaz says, “There is a lot of skepticism today as to whether memoir is real. But when fiction is done at a certain level there is skepticism as to whether it is really fiction.” Although I read This Is How You Lose Her a few weeks before the Guardian article was published, it was with this very skepticism that I proceeded through the book. A couple of pages into that masterful final story, I was dying to know: is Yunior Junot?

Of course, when it comes to fiction, the answer is never going to be a straight yes or no. Really, it’s besides the point. The story’s true allure comes from its multiple layers, subtly pulling from both Drown and Oscar Wao in ways that made me want to immediately go back and reread all three of Díaz’s books in a row. That last story, “The Cheater’s Guide to Love,” shows Yunior years down the road. Rocked hard after being (rightfully) dumped by his fiancee, he is finally learning the error of his womanizing ways. The pain of this heartbreak is brutal and sends him spiraling into depression, but it is this emotional rock-bottom that might finally offer Yunior a way out of the hole he’s dug himself into.

Since most of the stories feature Yunior, the narrative as a whole is very male-centric. Only one of the stories, “Otravida, Ortravez,” features a female point of view; this is also the only story that is not tied in with the others. Still, to dismiss Yunior’s crassness and boneheaded machismo would also dismiss the very human portrait that Díaz has created. More importantly, it would dismiss the nuanced portrayal of the outside factors — culture, sexism, marginalization — that feed into Yunior’s many faults. Ultimately, the book shows that Yunior’s way just isn’t going to work. It’s not sustainable.

So, if you really want to hurt me, talk badly about my language. Ethnic identity is twin skin to linguistic identity — I am my language…Until I am free to write bilingually and to switch codes without always having to translate, while I still have to speak English or Spanish when I would rather speak Spanglish, and as long as I have to accommodate the English speakers rather than having them accommodate me, my tongue will be illegitimate.

Remember that, because Díaz’s playfulness with language is not only legitimate, it’s vivid and marvelous. And it’s Junot.

This Is How You Lose Her will be released on September 11, 2012 by Riverhead Books, an imprint of Penguin.

11 thoughts on “This Is How You Lose Her”