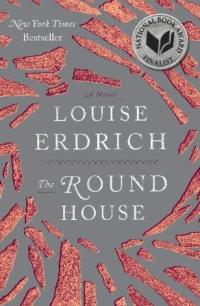 If you’ve read Louise Erdrich’s The Plague of Doves (2008), the name “Coutts” will probably ring a bell. In her newest book, The Round House, Erdrich returns to familiar grounds and picks up where Geraldine and Bazil Coutts left off. Now married and the parents of a twelve year old boy named Joe, the happy family’s life is shattered when Geraldine is brutally assaulted one evening somewhere within the premises of the Ojibwe reservation where they live.

When all of this happens, it’s 1988 and Joe is eager to be treated like an adult. He and his friends are barely coming of age and trying to navigate this tricky passage into adolescence. After his mother is attacked, Joe is forced to grow up quickly, regardless of how much information Bazil tries to keep from him. Meanwhile, his mother is traumatized and depressed, isolating herself from everyone and refusing to divulge any information about what happened.

Bazil is a tribal judge and feels that the attack had something to do with him; he hesitantly enlists Joe to help him pore through old case files to look for anyone who might have a serious grudge against him. What emerges are several harsh truths about life on a Native American reservation: the investigation is hindered by federal, state, and local laws (which, naturally, ties the hands of the tribal law enforcement, even though the crime happened on their land). When the attacker’s motive begin to come together, even more complex layers of injustice are added to the mix. And through it all is our young narrator: scared, angry, confused, and wanting nothing more than for his mother to feel safe again.

It isn’t necessary to have read The Plague of Doves before you read The Round House because they’re both separate stories that cover very different time periods; Erdrich gives you all the background information you need to know. Additionally, though The Plague of Doves has some of the most beautiful writing I’ve ever read and also addresses some of brutal history of the Ojibwe reservation, my overall response to that book was lukewarm. This is not the case with The Round House: I couldn’t put this one down! It’s devastating and intense, and it highlights the very real (and prevalent) problem of sexual assaults against Native American women. In her afterword, Erdrich writes that 1 in 3 Native women will be raped in her lifetime and that 86 percent of these assaults are perpetrated by non-Native men; because of U.S. laws, few of these rapes are every prosecuted. These are sobering statistics, and Erdrich does an excellent job of illustrating some of these issues in a nuanced way.

The Round House was released on October 2, 2012 by Harper, an imprint of HarperCollins. This book is on tour right now, so check out what other bloggers are saying about it. The Round House was recently nominated for a 2012 National Book Award; winners will be announced on November 14.

6 thoughts on “The Round House”