What it is: A graphic novel that explores the sticky issues of cultural identity. Ben Tanaka is a 30-year-old Japanese American who runs a movie house in Berkeley. His longtime girlfriend is Miko, who is also a Japanese American but embraces her culture way more than Ben does. Ben is a sarcastic pessimist who generally tends to “think white,” and all of this has driven a wedge in his relationship with Miko. Their relationship is left on shaky ground when Miko leaves for an extended period to New York, and Ben’s world is further thrown into a tailspin when his only friend, Alice, moves to New York as well.

Why I read to it: The book has been recommended in tons of places.

What I thought: It was my first Tomine encounter, and I immediately went and requested another of his books from the library. The black and white drawings are understated but powerful; there are moments in the book where the panels don’t have any dialogue, but the pictures speak volumes. (To get an idea: you know that recent Hurricane Sandy New Yorker cover? Tomine drew it). The book is split into three “chapters” that explore various — often uncomfortable — aspects of the role race plays in Ben’s romantic interests. As a whole the book is realistic and brutally honest, but it’s not without its humor. I loved it. 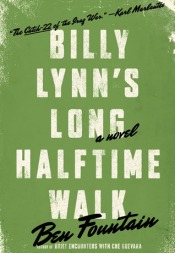 What it is: When Fox News films the Bravo Squad in action, bravely fighting Iraqi insurgents, the eight survivors become overnight heroes. Suddenly they’re a hot commodity: a film might be made about them, people stop them wherever they go, and they’re the guests of honor at the Dallas Cowboys’ Thanksgiving game, where they’re scheduled to make a special appearance with Destiny’s Child. Flashbacks aside, the events of the book all take place on that one day, told through the conflicted point of view of 19-year-old Specialist William Lynn.

Why I read it: The book had steadily built momentum through word of mouth. Then it was nominated for a National Book Award.

What I thought: This book has sat on my shelf pretty much all year, and I went back and forth on it — even with all the buzz — because contemporary war novels don’t really call out to me. Fountain ups the irony and dark humor to portray the circus-like theatrics of it all: the heroes (anti-heroes?) of the story get consumed by the military propaganda, media frenzy, and football madness of it all. It’s a story about a group of soldiers, yes, but the more important thing is the story it reflects about society. It’s not a bad book and I can see why people love it, but it’s not really my thing. I definitely recommend going the print route rather than the audiobook route, though.