Most children latch on to the security of objects, but I went further. I was obsessed with cabinets of curiosities, historical efforts to catalog and control nature’s oddities….Collecting information and talismans is a way of exercising magical control. You can hold a lucky charm and know everything about nature’s creatures yet still be terribly lonely. 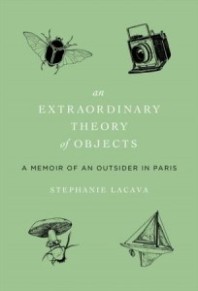 Stephanie LaCava was always happy to stay immersed in her own world as a child. She kept a collection of objects, latching on to the items as well as the stories behind them. Admitting from the start that she had always been a strange and awkward child, she writes about a period of her life when this strangeness consumed her. At the age of twelve, her father got a job in France and the whole family moved to Le Vesinet, a suburb of Paris. Thrust into a school with other expats, she was an outsider who retreated further into her world. At the age of thirteen, her depression could no longer be ignored.

Now an adult, LaCava looks back on these troubling years through the prism of her unique perspective. As she retells her story, she breaks up the narrative much like her younger self would have done at the time, giving anecdotes or a detailed history of the object in question in footnotes. Of her ancient Egyptian sarcophagus-shaped pencil case, for instance, she trails off into a footnote about mummy powder, the Greek origins of “sarcophagus,” and Egyptian burial practices. Accompanying many of these breaks in the narrative are illustrations of the objects in question. 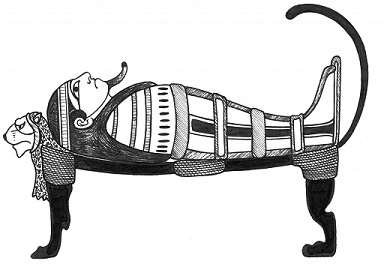 It’s an unusual — and sometimes frustrating, given all of the breaks in the narrative — way to tell a memoir. But it’s hard to imagine it written different way. This is how LaCava saw (sees?) the world and coped with her loneliness and depression, finding small wonders in some of the most seemingly insignificant objects. The book itself is also an interesting object: it’s a textured, deckle-edged hardcover that’s only a bit taller than the length of my hand. There were times when I thought the book was a little too detached, but I generally enjoyed it.

An Extraordinary Theory of Objects: A Memoir of an Outsider in Paris was released on December 4, 2012 by Harper Books, an imprint of HarperCollins. This book is on tour right now, so check out what other bloggers are saying about it.

4 thoughts on “An Extraordinary Theory of Objects: A Memoir of an Outsider in Paris”