Waiting for the Barbarians: Essays from the Classics to Pop Culture by Daniel Mendelsohn

What it is: An eclectic collection of essays that analyzes everything from Greek mythology, to people’s endless fascination with memoirs, to the endless praise bestowed upon Mad Men.

Why I read it: I always enjoy Mendelsohn’s essays when I encounter them online, but I had never read a proper collection of them.

What I thought: I was tortured by The Iliad and The Odyssey not once but twice in high school and have been allergic to most Greek literature ever since (not counting philosophy). So those essays didn’t stand for me out as much as the rest of the book, but that has 100% to do with me and 0% to do with Mendelsohn. (However, ancient Greece is Mendelsohn’s particular area of expertise, so people who enjoy Greek literature would probably be in heaven.) I absolutely loved everything else. Having followed the media coverage of Julie Taymor’s Spider-Man brouhaha, “Why She Fell” was definitely one one my favorite essays, as was “The Wizard” (about James Cameron’s Avatar).  Another one I enjoyed was “Oscar Wilde, Classics Scholar;” I had no idea about Wilde’s academic background and found this aspect of his history fascinating. The last two sections of the book — about literature and memoir — were fascinating and added tons of books to my to-read list. I particularly loved his review of Jonathan Franzen’s The Discomfort Zone (which I read last year but never reviewed because every time I sat down to write, I just ended up going, “Oh, Jonathan…what are we going to do with you?”). Mendelsohn’s critiques are all intelligent, engaging, and eloquently written. It’s a beautiful collection. 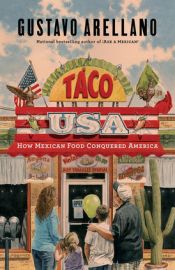 What it is: An exploration of Mexican food’s slow entry into the American mainstream. It also raises interesting questions about cultural appropriation and the definition of “authentic.”

Why I read it: I wanted to see what Arellano would say about the food of my people: Tex-Mex. (That, and I just like Arellano.)

What I thought: Taco USA is endlessly entertaining and will make you endlessly hungry. As with many other things in the history of this country, Mexican food has existed in the US as long as Mexicans have been here; it was just looked down upon as an exotic curiosity until someone (read: someone white and wealthy) was in a position to elevate its status and introduce it to the mainstream. Case in point: taco wagons and tamale carts manned by Mexicans? Dirty and cheap. Food trucks? Hipster gold. Arellano also argues that Mexico is such a diverse country and Mexican food is such a weird product of so many cultures that addressing authenticity is kind of pointless. In his book, if it’s been influenced in any way at all by Mexican culture, it’s Mexican food. Maybe not good Mexican food, but Mexican food nonetheless. One of my favorite aspects of the book was its exploration of the mass-marketing of various Mexican foods. Two words: canned tortillas (shudder). As for Tex-Mex? Mexicans in South Texas gave the world fajitas, and Mexicans in San Antonio gave the world chili. So stop denigrating Tex-Mex!

2 thoughts on “Quickies: Waiting for the Barbarians & Taco USA”