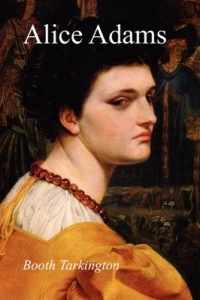 Alice Adams is about a middle class girl who aspires to join the ranks of high society. As a girl, she was friends with many of these people; her family wasn’t poor enough so as to make her friendships with wealthy children seem improper. Once everyone came of the age where one should be properly presented to society, poor Alice was left behind.

But, of course, Alice is young, beautiful, and desperate to fit in. She makes due with what she has, trying to keep up with the latest fashions and desperately clinging to her one well-off “friend.” Alice knows her place in the world, but that doesn’t stop her from trying to fit in. Meanwhile, her mother can see what pains Alice, and she pesters her ailing husband to get better so that he can finally start a successful glue business and lift them from their middle class troubles. The problems really begin when Alice reaches too high, gaining the affections of a man she can’t possibly have a future with.

I’m kind of at a loss as to how or why this book won the 1922 Pulitzer (for real: The Age of Innocence won the year before, and then this?). I liked Alice well enough, and the story was okay, but parts of it were just ridiculously far-fetched (not the least of which was the glue business that Mrs. Adams kept bothering her husband about). Mr. Adams was a completely spineless character. And as for the women…they were obviously written by a man. The book also had problems in its execution. Like so many other stories of its time, random racist remarks were sprinkled throughout the text for no real reason. Worse still was the time period; I assume it was trying to be set contemporary to its time, but it felt like the setting was much older than the early twentieth century.

And yet? Alice has stayed with me to the point where I want to rewrite her. Not necessarily because her character was so great, but because Tarkington could have given her so much more. I won’t give away the exact details of the ending, but I will say she grows up and faces reality. Unfortunately, her reality is kind of craptastic. I wanted her to have a hot love affair with steamy sex. I wanted her to be her own woman, the woman she was toying with as she worked through her personal stuff. And for Christ’s sake: I wanted her to look forward to her future, not be resigned to it. Would that have been too much to ask?

But alas. That would have been a different book.

Alice Adams was published in 1921 and won the Pulitzer for fiction in 1922.