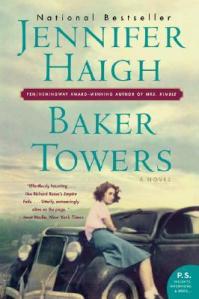 Baker Towers is a family saga set in the fictional town of Bakerton, Pennsylvania. It’s a small immigrant community that completely revolves around its one main industry, coal mining. The town is mostly separated by immigrant populations — Polish Hill, Swedetown, Little Italy — but pretty much everyone has ties to the mines and lives in company ho using. We first meet the Polish-Italian Novak family in the 1940s during a time of tragedy: Stanley Novak has suddenly died after returning from the mines. His wife, Rose, must now find a way to provide for the four children still living at home, Dorothy, Joyce, Sandy, and little Lucy; at the time of his father’s death, George is already oversees serving in the armed forces.

The novel progresses through the decades, and the point of view alternates between each member of the family as they navigate life. George and Dorothy, the oldest, are able to leave Bakerton through their chosen careers. Joyce is in high school when her father dies; of all of the children, she shows the most promise and is a star pupil. Sandy is probably the one who takes their father’s death the hardest, and he becomes a bit of a troublemaker in the years that follow. Lucy is still too young to remember much from those years.

As with Haigh’s other works, Baker Towers takes its time to develop. I loved how Haigh was able to capture such an beautiful, fragile portrait of small town America. The Bakerton at the beginning of the book is markedly different from the one decades later. In the 1940s, the town was thriving and growing. Economic downturns and a shift away from industrialization in the ensuing decades left the town struggling to survive.

But more than anything, the book is character-driven. Readers come to know what drives most of the members of the Novak family down their chosen paths. It’s astonishing how Haigh was able to believably and fluidly create six distinct, intimate narratives. Of all the members of the Novak family, Sandy’s narrative is probably the least developed, but it’s meant that way: he’s more of an enigma to his family than he is to the reader. When the book ends in the 1970s, everyone’s lives will have been unexpectedly altered in some way.

I finished the book very much attached to the Novak family, particularly Joyce. When the book ends, everyone is still relatively young enough to have most of their adulthood ahead of them, and I just wanted to keep hanging on. Luckily, I read the book late last year and not eight years ago when it first came out. Haigh has a follow-up book coming out, so I didn’t have to wait too long for some closure. I’ll be reviewing News from Heaven: The Bakerton Stories tomorrow, the book’s release day.

Baker Towers was originally published in 2005 by William Morrow, an imprint of HarperCollins. I received a paperback from Harper Perennial for review, but I ended up listening to it on audiobook instead.