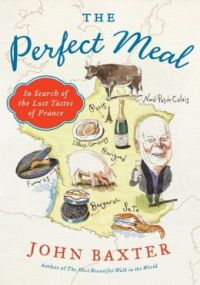 I first encountered John Baxter’s writing a few years ago when I came across Immoveable Feast, about the planning and creation of a French Christmas feast. Baxter had me — a longtime vegetarian — craving all of the amazing meat-based and/or fat-enhanced courses he so elegantly described. Baxter, an Australian expat now married to a French woman, has written many books about France. When I found out that his latest book again returns to the subject French culinary treasures, I couldn’t wait to get my hands on it.

The Perfect Meal tackles a subject close to Baxter’s heart: with the industrialization of food and the desire to find something quick and easy to eat, even France, with its legacy as the bastion of culinary arts, is rapidly ceding its culinary traditions to history. Go to a French restaurant, and you’re likely to find that at least some of your meal came from frozen or pre-packaged ingredients. Even the expensive French restaurants located in beautiful old buildings have lost their traditional French roots. The last straw for Baxter was going to a restaurant located in a magnificent Belle Epoque-era building; hoping against all odds that he’d be served an impressive, unmistakably French meal, he was instead served food that was “precious:” his soup, which was brought out as separate components and mixed before his eyes, was then topped with a pansy.

Where has all the traditional French food gone? A feast you’d have found even a hundred years ago must be impossible to create by today’s standards: the preparation would take ages, and the cost would be astronomical. But even if money was no object, are there even people still making the traditional food of yore? Does anyone really still roast an entire ox? Would it be possible today to compose a menu for a traditional French feast? Unfortunately, money was very much an issue, but Baxter was still intrigued. His actual feast would have to be a fantasy, but the menu planning could be real. With his fantasy feast in mind, he sets off to all parts of France to find the answers to his questions.

It’s hard to categorize this book. Yes, it’s food writing, but it’s also so much more: part travel writing, part food history, part memoir…there are even recipes at the end that give it a cookbook feel. The meals Baxter goes in search of have a touch of the familiar (French onion soup), the extravagant (caviar), and the cringe-inducing-yet-historically-accurate (lamprey, which is basically a blood-sucking eel that used to be common in certain parts of France back in the day).

For every part of France that Baxter visits, readers also get a fascinating crash-course in that area’s history, especially as it pertains to food history. You learn the historical roots of why vegetarianism has yet to fully be embraced in France and why certain parts of France went through a period of eating everything from cat to elephant (yes, elephant). You’ll also see how hosting the French king for a days-long 17th Century banquet could set you back millions of modern-day dollars. The menu Baxter created may have been fantasy, but it’s still a lot of fun to come along for the ride as he works out the details.

The Perfect Meal: In Search of the Lost Tastes of France was published in February 2013 by Harper Perennial, an imprint of HarperCollins.

9 thoughts on “The Perfect Meal: In Search of the Lost Tastes of France”