This one goes out to all you perverts out there. (The rest of you: just keep on giving me that side-eye.)

This week’s Nonfiction November topic is to match a nonfiction book with a fiction recommendation. I finished up Jesse Bering’s Perv: The Sexual Deviant in All of Us a few weeks ago and have been mulling it over periodically ever since. The premise is pretty straightforward: we’re all “perverts” in one way or another, so (to an extent) we should all be less judgmental and more sympathetic to other people’s deviant desires.

Bering starts with himself as an example. As a gay man, he grew up hearing that people like himself were perverts (among other pejorative things); these days, society as a whole tends to be more accepting towards LGBTQI-identified folks. We’re not quite there yet and there are still plenty of homophobes out there making life miserable for people, but there’s definitely been a cultural shift towards acceptance. The definition of “pervert” has changed somewhat.

And that’s because it’s completely subjective depending on society’s values at any given time. (The original “perverts:” atheists.) Bering dives into a fascinating cultural history of perversion and provides countless interesting/horrifying tidbits along the way. Case in point:

Some of the examples are humorous (in an unfortunate and twisted way…woe to the poor souls accused of bestiality back in the day), and some are definitely out there (a woman actually married the Eiffel Tower…and consummated the marriage). But what about the deviancies that have pretty much always been (and will probably continue to be) considered perversions of the worst kind, such as rape and pedophilia? That’s where things get really interesting and — and sometimes uncomfortable — as Bering explores these two topics in particular, as well as their attempted treatments, from various ethical and physiological angles.

If you’re easily scandalized, this probably isn’t the book for you. Some of the stories might make you blush (or flush? *raises eyebrow*). But it’s a fascinating book that’s written with a healthy dose of humor (how can one not crack jokes with some of these things?). A nuanced book about the complexities of human sexuality? More please!

And now for my fiction book pairing… 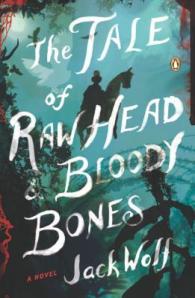 I was tempted to say Story of the Eye by Georges Bataille, but that one is actually mentioned in Perv, and that would be too easy. So instead, may I direct your attention to The Tale of Raw Head and Bloody Bones (a title that has always sounded pervy to me, but uh…actually isn’t in the context of the book). Its author, Jack Wolf, is transgender and wrote the book as he was transitioning.

The Tale of Raw Head and Bloody Bones is about a sadist named Tristan Hart; he’s studying medicine in London, and he’s secretly obsessed with inflicting pain. He’s prone to blacking out and having violent outbursts — “nervous” episodes — so his main focus is on keeping it together so that he can continue studying medicine. But in the back of his mind are those always-present sadist fantasies of his, especially where the (masochist) love of his life is concerned.

The book is definitely not for everyone — it’s written in the style of 18th-Century English — but once you get over that hump, it’s easy to get lost in the depths of Tristan’s deviant mind.

So what do you say…any pervy fiction or nonfiction you’d like to recommend?

Nonfiction November is co-hosted by Leslie from Regular Rumination and Kim from Sophisticated Dorkiness. See what fiction and nonfiction other bloggers are pairing up this week here.