What it is: Growing up in a North Korean work camp for orphans, Jun Do manages to rise from the humblest ranks in life to one of the highest, eventually even encountering the terrifying the Dear Leader himself, Kim Jong Il. How he gets there is almost farcical, but the one thing keeping him grounded is his undying love for a beautiful actress named Sun Moon, whose career the Dear Leader is bent on destroying.

Why I listened to it: Since it won the 2013 Pulitzer, it was part of my Pulitzer Project for this year.

What I thought: This book is the literary equivalent of “Go big or go home.” And damn. Johnson went for it. The book generated a lot of buzz when it was released, but for some reason, I just never had the desire to read it. I picked up the audiobook shortly after it won the Pulitzer, not really knowing what to expect. I got lost a couple of times because it’s a lot to wrap one’s head around via audiobook, but more than anything, I was transfixed by Jun Do’s nightmarish conundrums. The Orphan Master’s Son is a clever and ambitious project that basically just blows everything else out of the water; I’ve never read anything else quite like it. So much of the book centers on identity, right down to the protagonist’s name — Jun Do…John Doe? — and though the book is almost dystopian in nature, it clings to some of the most basic tenets of human nature, particularly love. 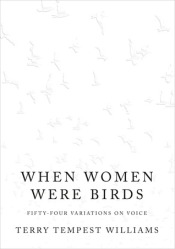 When Women Were Birds: Fifty-Four Variations on Voice by Terry Tempest Williams

What it is: Before Terry Tempest Williams’s mother died, she told her daughter, “I am leaving you all my journals, but you must promise me you won’t look at them until after I’m gone.” That request was honored, and after her mother died, a grief-stricken Tempest Williams went to her mother’s journals to find some solace. What she found instead were three shelves full of blank journals. As time passed, she felt at turns angry, devastated, betrayed, and completely mystified as to what kind of message her mother had wanted to send her. The book is comprised of fifty-four variations — meditations of sorts — in which Tempest Williams imagines the message(s) her mother was trying to convey.

Why I read it: It sounded intriguing.

What I thought: Some parts were hit-or-miss for me. It took me a while to get into the book; there’s no denying the poetic beauty of the author’s writing — and at times, the chapters consist of straight-up poetry…but I’ll be the first to admit I’m not a terribly poetry-minded person. That said, there were parts of the book that I wanted to copy down at length to savor later (and, in a couple of instances, I did just that).

3 thoughts on “Quickies: The Orphan Master’s Son & When Women Were Birds”