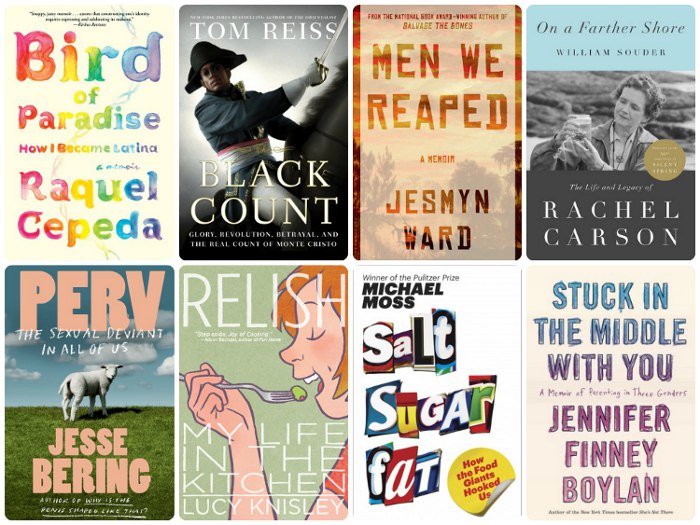 I read a lot of nonfiction at the beginning of 2013, but by the end of the year, but my reading switched mostly to fiction. I think a big part of that was work and school; with all my homework and essay grading, all I wanted to do was lose myself in a good story! I’m glad I didn’t get too thrown off track, though; I read several of these books during the last months of 2013. Here are all of my favorites in alphabetical order:

The Black Count: Glory, Revolution, Betrayal, and the Real Count of Monte Cristo by Tim Reiss (2012)

Alexander Dumas’s father, General Alex Dumas, was the Haitian-born son of a slave and a plantation owner. He went on to become a heroic general in the French Revolution and fought alongside Napoleon, only to be later betrayed and fade into obscurity. From my review: This book is “a vivid and highly readable text…[It] reconstructs the life of a man who was larger than life but was unfairly relegated to the footnotes of history for so long.”

On a Farther Shore: The Life and Legacy of Rachel Carson by William Souder (2012)

Though she had published bestselling books before, Rachel Carson became a household name after the release of Silent Spring, a scathing exposé published in the early 1960s about how pesticides affected the environment. The book lead to the banning of DDT and helped ignite the environmental movement. From my review: “It’s one of the best biographies I’ve ever read.”

Perv: The Sexual Deviant in All of Us by Jesse Bering (2013)

How would you define “pervert?” As Bering shows, your definition is influenced by the era in which you were raised and which values that society holds dear. He also looks at some of the sexual proclivities that societies have deemed “deviant” and is unafraid to wade into some of the more controversial topics. From my review: “If you’re easily scandalized, this probably isn’t the book for you…but it’s a fascinating book that’s written with a healthy dose of humor.”

Salt, Sugar, Fat: How the Food Giants Hooked Us by Michael Moss (2013)

Salt, sugar, and fat are the three key ingredients in processed foods that keep people addicted to the stuff. This theory itself is nothing new, but Moss dug through scientific studies, inside interviews, and confidential documents to actually back up the claim with hard facts. From my review: “Since reading the book, I have seriously questioned myself each time I’ve reached for cheese.” Seven months later, that’s still true!

Bird of Paradise: How I Became Latina by Raquel Cepeda (2013)

Because centuries of colonialism have wiped out many of the historical records in the Dominican Republic, Raquel Cepeda turned to DNA testing to explore her lineage. Part of the book is about her dysfunctional childhood, which explains why she couldn’t turn to her parents for help in her genealogical explorations; the other part is about what the DNA testing uncovered. From my review: “It’s an intriguing premise for a memoir, propelled forward by Cepeda’s distinct voice and engaging prose.”

From 2000-2004, National Book Award-winning author Jesmyn Ward lost five men who were very close to her, including her younger brother. Her memoir is a tribute to those men, but it’s also a look at how they all died largely in part because they were poor, black, and male. From my review: “It’s an incredibly sad book to read — you can feel the undercurrent of Ward’s raw emotion — but it’s also an incredibly important book to read.”

As the daughter of a chef and a gourmand, Lucy Knisley grew up around fine dining. In her graphic memoir, which comes with illustrated recipes, she recounts her experiences growing up around foodies and her life working around kitchens and food. From my review: “Foodies won’t want to miss reading about Knisley’s enviable food journey. It’s impossible not to be utterly charmed by Relish.”

Stuck in the Middle with You: A Memoir of Parenting in Three Genders by Jennifer Finney Boylan (2013)

As someone who transitioned from male to female ten years after her first child was born, Jennifer Finney Boylan has had the unique opportunity to experience both fatherhood and motherhood. Her memoir is also broken up by interviews with various people who share their own experiences as parents. From my review: “Whether or not you’re a parent, this well-crafted memoir will certainly give you plenty to think about.”