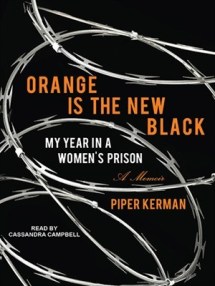 Orange is the New Black first caught my eye a few years ago when it first came out. I kept going back and forth on it. It looked intriguing, but I was also wary of the whole prison-as-told-through-the-eyes-of-a-privileged-white-lady thing. And ultimately, that’s why I put the book on the back burner for so long.

Fast-forward a few years, and we all know that turned out. OITNB was helmed by Jenji Kohan, picked up by Netflix, and shot into fawning fandom. I, like many others, ended up marathoning Season 1 in like two days. And all the while? I was going, “ARGH, WHY DIDN’T I READ THE DAMN BOOK BACK IN THE DAY?!!” (At which point it was too late because the waiting list at all of the libraries was insane.)

Anyway. I finally got a hold of the audiobook through the library, and predictably, I really enjoyed it. The book is about Piper Kerman, a responsible woman with a job and a fiance…and an almost-ten-year-old felony drug case hanging over her head and threatening to send her to prison for an undetermined amount of time. Years ago, when Kerman was a carefree college grad, she started a relationship with a woman also happened to organize drug smugglers. Kerman was lured by the seeming glamour of it all, traveling around the world with her well-to-do girlfriend, but then it became a little too real: she was pressured into smuggling drug money. She didn’t get caught, but it freaked her out and she left that part of her life behind her. Or so she thought. Almost ten years later, Kerman was named in an investigation to bring down said drug smuggling ring. It’s how she found herself eventually doing time in a federal women’s prison.

Yes, my initial suspicions were correct: OITNB indeed has prison-as-told-through-the-eyes-of-a-privileged-white-lady written all over (and in) it. Ultimately, that didn’t make her observations of life in prison less valid. Kerman will be the first to admit all of the advantages she had in prison (and continues to have — hello, book/Netflix deal). She had incredible support in prison: letters and all the books she could possibly want; a jam-packed visitation schedule that included not just her family and fiance, but friends and strangers as well; money, both in prison and out of it; job opportunities even with a felony on her record…the list goes on.

Comparatively, many of the inmates she was with don’t have even remotely the same chances (would any of those women she was with have gotten a book deal out of their prison stay(s)? Not likely). Kerman may have been in a “good” prison, and some of her fellow inmates may have also been well-off, but the majority struggled with addiction, poverty, and lack of social and familial support — several were even imprisoned alongside family members. She acknowledges all of this and more, including racism and oppression within the judicial system, lack of health care and educational opportunities inside prison, and sexual assault.

It is a memoir, so much of the book is centered around Kerman’s own emotions and experiences, but she does a good job of balancing that by highlighting some of injustices she witnessed. Those expecting the neurotic Piper Kerman from the Netflix series won’t really find her in this memoir; yes, Kerman is at times self-indulgent (who isn’t in their memoir?), but she’s a lot more thoughtful than the show would have you believe. If you’re a fan of the series, you should check out the real deal.

Orange is the New Black: My Year in a Women’s Prison was released in April 2010 by Spiegel & Grau, an imprint of Random House. I listened to the audiobook, published in July 2012 by Tantor Media.

3 thoughts on “Orange is the New Black: My Year in a Women’s Prison”