Greetings from Olso! I’ve been here less than 24 hours, but it’s been love at first sight for me! 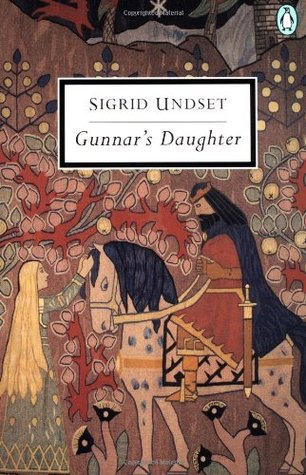 While looking for Norwegian authors for this vacation-related reading project of mine, I came across Sigrid Undset and discovered that 1) she won the Nobel Prize for Literature in 1928, and 2) a lot of her books are set in the Middle Ages and feature strong female characters. That, of course, sold me! I settled on Gunnar’s Daughter, her first historical novel, mostly because of its settings and the fact tat it was short enough to read before my trip. I’m glad I did, because it ended up being one of the best books I’ve read so far this year.

The book is set mostly in 11th century Iceland and Norway. Ljot and his uncle Veterlide are Vikings who sail over to Norway. They become guests of one of the most powerful landowners there, and twenty-year- old Ljot immediately falls in love with the landowner’s spoiled teenage daughter, Vigdis Gunnarsdottir. Because of her beauty and position of privilege, she has had many suitors, but she keeps rejecting everyone. Her father allows this, as he leaves the choice of suitor up to her.

Vigdis does genuinely fall in love with Ljot and finally agrees to marry him, but after seeing the extent of his violent side, she rejects him. Outraged and determined to make her his, Ljot rapes her and gets her pregnant. Even though she was raped, she knows she will be blamed for bringing shame upon her house. As her pregnancy advances and becomes harder to hide, she grows more and more distraught.

I don’t want to say much more because a lot more happens that hinges on a few key decisions. But I loved it. I was a little apprehensive at first because I don’t really read this type of historical fiction, so I thought it might be kind of a chore. I was so wrong. I ended up reading the book until past three in the morning so that I could finish it. The storytelling and the pacing is great. Most of all, I loved learning more about the history and culture, especially since I’ve now visited some of the places mentioned in the book. The Penguin Classics edition also comes with maps and endnotes, which offer pronunciation guides and historical insights (such as when Undset strays from history and makes Christian changes reflective of her time). I can’t recommend this edition enough. It’s fabulous.

Gunnar’s Daughter was originally released in Norway in 1909. I read the Penguin Classics edition that was released in 1998.