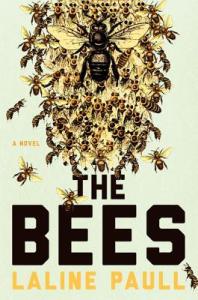 Born into the lowest caste of her hive’s hierarchy, Flora 717 is destined to be a sanitation worker for her entire life, mindlessly tending to the dirty work assigned to her by the hive’s higher-ups. Everything in the hive is done to serve the queen, who is immortal and loves all of her children. Accept. Obey. Serve. Those are the mandates Flora must religiously follow.

It’s a fraught time for the hive; a strange sickness keeps appearing, and any bee determined to be unhealthy or useless is immediately put to death. This potentially spells danger for Flora: she’s certainly ugly like the other sanitation workers, but she looks different from everyone else. And there’s something even more dangerous about her: unlike the other sanitation workers, who cannot speak and mostly spend their lives with their minds dulled, Flora has the ability to speak and think for herself. She can also has the ability to produce Flow, the royal jelly used to feed babies in the nursery. It’s unheard of for a lowly sanitation worker.

Because of her unique abilities, The Sages (the hive’s high priestesses) allow Flora to move up in the ranks and work in the nursery. Later, because of her strength and intellect, she’s allowed to become a forager and leave the hive to collect pollen. As many bees never even see the outside of the hive in their lifetime, Flora’s experiences are unheard of. Yet since she’s so different, a lot of eyes are also on her and she must tread lightly; she harbors a secret that would mean certain death if discovered.

The way Paull writes about hive life makes everything seem dramatic and almost sinister. Things get even more intense as winter approaches and food becomes scarce. That said, there’s also quite a bit of humor; the female bees do all the work around the hive and that includes serving the male drones, who seem to exist solely to have fun and mate. They’re vulgar and are constantly preening about their sexual prowess and superiority. They all have female servants to groom and serve them, but Flora, who can think for herself, seems to be immune to the drones’ “charms” and has no problem talking back. The drones eventually receive their comeuppance in a scene that left me speechless — smirking (because I’m evil), but speechless — yet there was one drone in particular that I ended up having a soft spot for.

I. LOVED. THIS. BOOK. (I’m starting to think I have a thing for books told from the perspective of flying insects?) There’s a startling amount of information that Paull includes about bees, and it’s all done in a way that flows with the story. You learn about the different parts of the hive as Flora does; the changes in her body — for instance, the fact that she can produce Flow — are just as much as surprise to the reader as they are to her. Paull also does a wonderful job of helping you visualize the different parts of the hive and the religious fervor with which all serve the queen. I also had the added benefit of listening to The Bees on audiobook; Orlagh Cassidy nailed the narration, giving the book a tense, dystopian feel. It’s utterly mesmerizing, and it’s certainly one of the more unique stories I’ve ever encountered.

I’ll leave you with the book trailer, something I don’t think I’ve ever included on a book review but must do so in this case because 1) It’s an awesome trailer; and 2) It uses “Flight of the Bumblebee,” which — long, long ago — I once learned to play on clarinet just for fun because I was that type of band geek:

The Bees was released in May 2014 by Ecco, an imprint of HarperCollins.

4 thoughts on “The Bees”