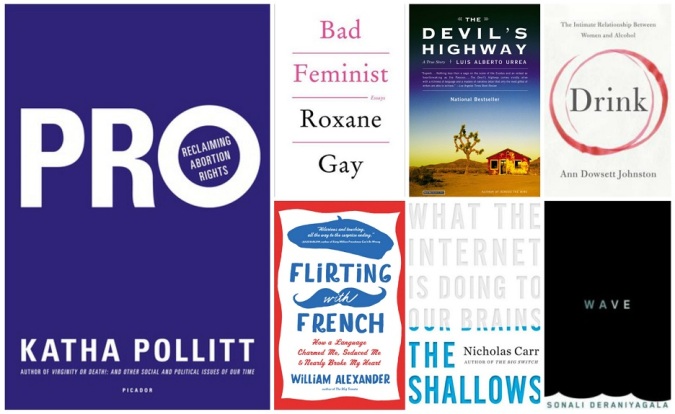 Nonfiction books comprised a little over a third of my reading in 2014, a little less than usual. There were a number of stellar books, but Katha Pollitt’s book is the one that stands out the most when looking back at my nonfiction reading list. Here’s my list of favorites in alphabetical order:

This collection of essay ranges from personal to social commentary, looking critically at everything from reality television to politics to the debate over trigger warnings. In her introduction, Gay also embraces the title of “bad feminist;” she admits her human flaws and contradictions but insists that they don’t make her any less of a feminist. From my review: “It’s nice to finally have a contemporary mainstream feminist book that I can recommend to people without any ideological reservations.”

In May 2001, a group of 26 men paid coyotes to get them from Veracruz to the United States. They crossed the Mexican border into the Arizona desert, but only 12 of them made it out alive. Talking to the survivors, coyotes, the Border Patrol, and various other people involved in with the “Yuma 14” case, Urrea describing the men’s harrowing journey as they slowly baked in the desert. He also looks at the other factors that pushed the men and countless others like them to make such a dangerous journey in the first place.

Drink: The Intimate Relationship Between Women and Alcohol by Ann Dowsett Johnston (2014)

Part memoir, part journalistic exploration, this book looks at the rise of alcoholism in girls and women. Johnston talks about growing up with alcoholic parents and opens up about her own alcoholism. She also explores alcoholism in popular culture, college culture, and society in general, exploring the ways in which girls and women are particularly vulnerable. From my review: “Johnston tackles difficult (and often culturally loaded) topics in non-judgmental ways. It’s an eye-opening conversation starter.”

Flirting with French: How a Language Charmed Me, Seduced Me, and Nearly Broke My Heart by William Alexander (2014)

William Alexander is a francophile who dreams about moving to France and blending in with the locals, but he can’t speak the language. In his fifties, he commits to learning and becoming fluent in French even though he’s terrible at picking up the nuances and is far beyond the ideal age (early childhood) for picking up a new language. From my review: “”Language nerds: you should check this one out. Il est charmant.”

2014 was a particularly fraught year for abortion access; there were a number of high profile laws passed; a lot of clinics closed in the process. In her new book, Pollitt used a clear, concise, common sense approach to lay out solid arguments in favor of abortion access; we need to maintain access to abortion because it’s a part of basic health care and it’s good for society. I couldn’t stop nodding as I read this book; it’s like Pollitt opened up the reproductive justice section of my brain and put everything into book form!

The Shallows: What the Internet is Doing to Our Brains by Nicholas Carr (2010)

Several years ago, Nicholas Carr published an article in The Atlantic called “Is Google Making Us Stupid?” It set off a firestorm of debate and laid the grounds for The Shallows, which takes a closer look at how technology has been rewiring our brains. In an age of speed and information overload, Carr shows how we’ve trained our brains to do things like skim through text rather than focus on it for extended periods of time. It’s a fascinating book that will make you more mindful about how you use technology and process the information it provides.

Sonali Deraniyagala writes about losing her her parents, husband, and two young sons in the December 2004 tsunami that claimed the lives of over 230,000 people. The sole survivor of that family vacation turned tragic, she reflects on the sometimes ugly ways that her grief manifested itself. From my review: “Wave is not a cookie-cutter memoir about loss and grief that ends with rays of sunshine, and Deraniyagala deserves every one of the accolades she received.”