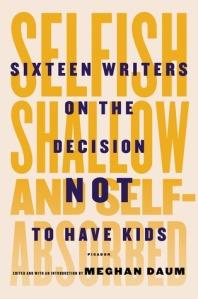 A few years ago, before I hit the big 3-0, one of my older students asked if I had kids. I told her no, and she immediately started scolding me, saying that time was running out and that I needed to start trying to get pregnant so that I wouldn’t be too old to enjoy my hypothetical children or run into problems down the line. When I politely told her I didn’t want kids, she doubled down on trying to convince me of the error of my ways.

I am now at that age — my early 30s — when my friends are being told by their OB/GYNs to start wrapping things up in the baby department. Their eggs, apparently, are dying, and they’re reaching the end of their reproductive lives. Or something. (That sounds really extreme for early-to-mid thirtysomethings, no?). If they wait any longer, it could be too late. So my friends are doing it (no pun intended): they’re working on that second or third baby to complete their family.

Me? I’m daydreaming of my next big travel adventure. I’ve been blatantly called selfish for my childfree by choice stance (maybe I like spending entire days on my couch, living off popcorn and beer while reading multiple books). Shallow? Whatever. Self-absorbed? Yeah, sometimes. But what’s it to you?

Naturally, Selfish, Shallow, and Self-Absorbed immediately caught my eye. The book consists of sixteen essays by authors on both sides of the pond. Some have always known that they don’t want children; others planned to get around to it eventually and never did. Some were boxed into the decision after failed fertility treatments or unwilling partners, while others found themselves to be the unwilling partner. Some really love children, others really don’t. The reasons why each author decided not to have kids are complex, and they’ve all handled it in different ways.

In “Babes in the Woods,” Courtney Hodell uses a bit of humor to justify her “it is what it is” attitude towards parenthood:

[A] woman held both my hands, her eyes drilling into mine, and said that for her, having children was like flicking on the light in a dark room. But the older I get, I thought mutinously to myself, the more I like a bit of dim lighting. At forty, it’s easier on the complexion.

Paul Lisicky writes from a completely different place in “The New Rhoda,” discussing how living through the AIDS epidemic deeply influenced his decision:

Imagine it. Look at a drop of your blood, your semen, your saliva, and think of it containing a thousand little grenades. Not just for you, but for the lover you came into intimate contact with. How would your life change? could you ever disappear into yourself, your skin again? When you finally got the nerve to be tested, and found out that you did not carry those grenades, could you still think of that fluid as a substance you’d choose to make a baby with? Imagine it.

A few of the authors go into the sociological aspects of remaining childfree/childless, talking about the influence of feminism and the availability of contraceptives to give people control over their reproductive lives. Several discuss their extensive travels and achievements, acknowledging that their careers would probably not have been what they are if they’d had children to care for.

I was a little worried about running into obnoxious and/or polemic essays. Leave it to Lionel Shriver to fill that role. In “Be Here Now Means Be Gone Later,” she writes things like:

If I feel, oh, a little wistful about the fact that the country of my birth, the United States, will probably within my lifetime no longer be peopled in majority by those of European extraction like me, that passing dismay has never been considerable enough for me to inconvenience myself by giving lifts to football practice. Frankly, if I can’t be troubled to replace myself with a reasonable facsimile, immigrants willing to nurse sick little boys through their fevers have truly earned a right to take my place.

Of course, that “wistfulness” of mine is political dynamite. Yet maybe the immigration debate has sufficiently matured for us to concede that white folks are people, too.

I mean…who says things like that? (Besides Lionel Shiver?)

That essay aside, this was a really thoughtful collection. It was interesting to read everyone’s stories, especially those who actively pursued parenthood for a time and then went, “…oh well,” but embrace their childlessness. On that note, the subtitle is somewhat misleading: a lot of the authors didn’t exactly decide not to have kids; it just happened that way because of infertility or putting it off too long. Either way, the book gives you plenty to think about.

Selfish, Shallow, and Self-Absorbed: Sixteen Writers on Their Decision Not to Have Kids was published on March 31, 2015 by Picador, an imprint of Macmillan.

5 thoughts on “Selfish, Shallow, and Self-Absorbed: Sixteen Writers on Their Decision Not to Have Kids”