In The Fangirl’s Guide to the Galaxy, Sam Maggs offers burgeoning fangirls lots of practical advice on locating “their people,” navigating cons, participating in geek fandoms, and finding their feminist voice. In between chapters are interviews with successful women whose fangirl backgrounds have now turned into geek-oriented careers. It’s a book that skews towards the younger crowd: though Maggs and her interviewees are clear that a fangirl can be any age, a lot of the book is intro-level basic and is probably best suited for tweens and the younger end of the young adult spectrum.

The good thing about this book is that one can skip around to suit their needs. The beginning of the book talks about different fandoms and the labels for their geeky devotees; there are the big ones that people are already probably familiar with — Star Trek, Dr. Who, Lord of the Rings, Harry Potter — but the list of fandoms goes on and on (yet is by no means exhaustive). Most people could probably read through it and find something that relates to them. (Apparently, I’ve been a devout member of The Unsullied — Game of Thrones — all this time without even realizing it. Don’t even get me started on social media during/after the Red Wedding.)

As a feminist adult who blogs and used social media — and who grew up on Star Trek and read all the books as a teen — I’m definitely not Maggs’s target audience. A lot of it is Fangirling 101, and some of the advice, in this age of digital natives, seems really basic: stuff like, “don’t feed the trolls” or “look on Tumblr.” But I think back to my early days; I remember quite clearly being a little kid and announcing “I am a feminist,” but not having the vocabulary or the know-how to actually vocalize any of my thoughts. The Fangirl’s Guide to the Galaxy may be 101, but at least it does address some feminist ideas and plant a few seeds. 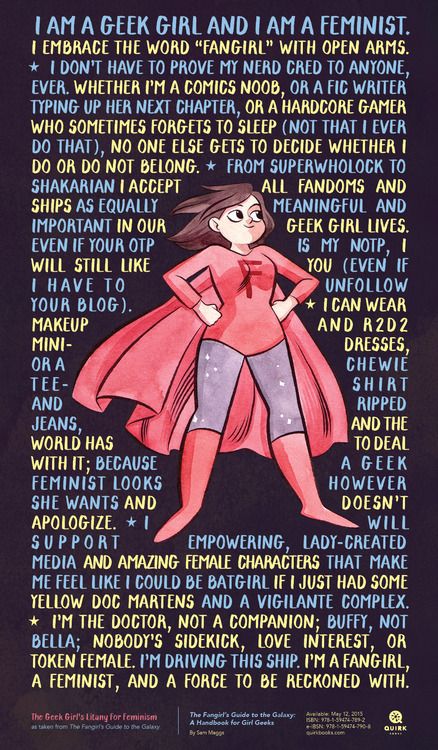 I think negative reviews of the book, for the most part, have been somewhat unfair in this regard. Some critiques are more valid: not everyone has the money, ability, or desire to go to a con or buy tons of geeky merch. But I think the main problem is that adults read the book expecting an adult guide to girl geekdom, but it’s a guide for literal girl — young, female — geeks (this is not an unfair assumption on the adult readers’ part, though: the book is “officially” labeled as adult nonfiction on Netgalley).

The book is what it says it is: a handbook. So no, you won’t find in-depth critiques or complex feminist manifestos on cosplay. But imagine you’re a tween on Tumblr and you loved Avengers: Age of Ultron, and you want that awesome toy of Black Widow speeding out of a flying plane on a motorcycle, but suddenly realize, “WHAT THE HELL?! That’s not Black Widow!” In this case, The Fangirl’s Guide to the Galaxy might be able to help you figure out how to channel your frustration into an appropriate critique to post online. And if you already have those skills, the book’s resource guide might be able to point you in the right direction to sites that might help you understand the (really stupid) anti-feminist uproar that’s popped up in Age of Ultron‘s wake over the past week.

In short: don’t look at this as a book for adults, because it’s really not…unless you’re a non-geeky adult who’s trying to figure out what the heck you’re kid/nephew/whatever is so obsessed with these days. Think of it as a resource that might point a curious kid in the right direction.

The Fangirl’s Guide to the Galaxy: A Handbook for Girl Geeks was released today by Quirk Books.

One thought on “The Fangirl’s Guide to the Galaxy: A Handbook for Girl Geeks”