by Lisa A. Phillips

What it is: Part memoir, part investigation, Phillips explores the role of obsessive love in women’s lives. She begins with her own story: many years ago she fell hard for someone, was rejected, and kept pursuing him. She ended up sneaking into his apartment complex early in the morning and was shocked that he remained locked behind his door with a baseball bat, ready to call 911. Phillips examines how she, an educated and confident person, could have done that. She also looks at case studies and interviews other women who have done similar things and closely examines the gender-based double standards: former NASA astronaut Lisa Nowak, for instance, became a comedic punchline in 2007; male stalkers, on the other hand, are universally feared and considered dangerous. Women who go through life pining over an unrequited love are pathetic and desperate, whereas men suffering from unrequited love are at the heart of many pieces of classic literature. Towards the end of the book, Phillips also looks at the positive sides of unrequited love.

Why I read it: It sounded like really interesting subject matter, and I was curious how the subject of stalkers would be handled.

What I thought: There are a lot of complexities to this subject, and Phillips does a great job of exploring the different angles. Some parts dragged a bit, but overall, I appreciated the historical context and the way she teased out the double standards. I also like that she split her own story up, interspersing each stage of her romantic obsession into relevant chapters. It’s really interesting how common unrequited love among women is; most women will experience it at some point in their lives (although not everyone will act on it). 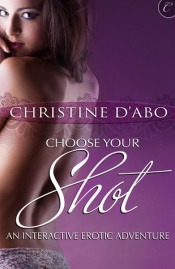 Why I read it: To examine the book’s structure and see if “choose your adventure” books worked better in eBook form. (Like, for real. I’ve been toying an idea for a writing project of my own for about a year now.)

What I thought: This is the second “choose your adventure” type book I’ve read. The other one was a romance with hook-ups; this is straight up erotica. In theory it’s a neat idea, but I’ve yet to see it executed in a non-cheesy way. The options just feel too paint-by-numbers. And I know this is erotica and not a romance novel, so it’s more about sex than plot, but when you have so many options, the already weak plot gets stretched way too thin.

One thought on “Quickies: Unrequited & Choose Your Shot”