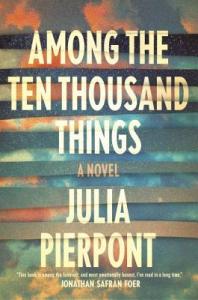 Do you go by Deborah? It sounds so uptight. I bet you hate Debbie. I hate Debbie, too.

This is a letter about Jack.

I began sleeping with your husband last June. We were together for seven months, almost as long as I’ve known him.

Julie Pierpont’s debut novel, Among the Ten Thousand Things, opens with a devastating letter from a lover scorned. The letter is placed on top of a stack of printed correspondence spanning the duration of the affair and left with the doorman of Deb’s building. But instead of going to Deb, the package makes its way into the hands of her curious eleven-year-old daughter, Kay, a sensitive girl who is bullied at school. Her father’s sexually explicit emails stun Kay, as do his occasional references to his wife and children: he actually talked about them — about her — to The Other Woman.

It doesn’t take long before Kay shares everything with her fifteen-year-old brother, Simon, a moody teen who’s desperate to be seen as an adult. He, in a fury, automatically takes the damning evidence to his mother and expects her to immediately file for divorce. She doesn’t: she’s horrified that the children read those emails and she’s furious at Jack, but she’s hit with so much so fast that she needs time to figure out what to do.

Most of the book takes place in this aftermath where no one knows what’s going to happen next. Jack, a successful artist who has a big opening coming up, is truly sorry for what he’s done; there’s no way to take it back. As the book unfolds, the reader learns more about the history of his relationship with Deb. However, it’s the impact on the children that takes center stage. I cringed as I learned more about the type of bullying that Kay was subjected to, matters only made worse as she struggles to process the new information about her father (I was positively mortified). Simon, too, acts out in his quest to be treated like a grown man, and he lashes out at both of his parents in a way that he didn’t before.

All of this happens in Part One of the book, and had the book continued in this vein, I would have been blown away. The writing is gorgeous and the plot is fast-paced and emotionally charged. I devoured it in one sitting. Unfortunately, everything deflated for me when I reached Part Two, a tiny section of the book that tidily gives away the entire ending. Part Three then picks up where the end of Part One left off, which effectively broke the spell the book had on me.

I still liked the book and think Pierpont is an incredible writer, and I love nonlinear books as much as the next gal. Part One is stellar. But Parts Two and Three…Imagine if the ending of a good movie was spliced right into the middle. It felt kind of like that. I don’t get it.

Among the Ten Thousand Things was released in July 2015 by Random House.

4 thoughts on “Among the Ten Thousand Things”