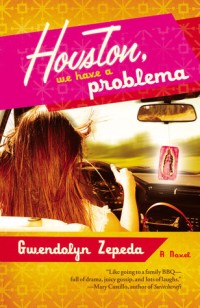 Though this book was published six years ago, its protagonist, Jessica Luna, typifies the twenty-something millennial: she can’t find a job doing something she loves, so she works a dead-end job in Houston to get by. She’s different in how she copes with life, though: she keeps her eyes open for signs, keeps a Virgen de Guadalupe image hanging on her car’s rearview mirror, and regularly consults Madame Hortensia, a psychic and tarot card reader, before making any major decisions. She’s the complete opposite of her responsible sister, who married a successful white guy and moved out to the suburbs to be a homemaker.

Jessica’s biggest problem at the moment is her boyfriend Guillermo, a talented artist who’d probably make it big if he could be more responsible. The chemistry between them is incredible but always seems to fizzle the morning after a booty call — she’s finally starting to face that that might be all she is. That seems to be their routine: he sweeps her off her feet, she tries to contact him, he ignores her, she gets furious, and the cycle starts all over.

Enter Jonathan, her brother-in-law’s co-worker. Sure, he’s white, but they have a surprising amount in common. Jessica ramps up her visits to Madame Hortensia for some guidance, but there are some problems that even Madame Hortensia can’t help with.

One big theme the book does tackle is machismo in Latino culture. You see it in the interactions between her and Guillermo — he gets away with a lot because that’s “just how Latino men are” — but the lightbulb goes off for Jessica when she finally sees that behavior at home between her parents; after all these years, Jessica’s mom has finally been worn down. It’s an eye-opening revelation for Jessica.

The book is a quick and light read, but Jessica frequently drove me nuts. As a Mexican American who grew up in Texas, I should’ve been a little more able to identify with her, but she often just had me going, “Girl, what?” She is very insecure and way too clueless at times. I will, however, give her credit for knowing who she is culturally; she will not apologize for that. In that regard, she did remind me of several of my friends. Another thing I liked about her was that she’s a tech girl at heart.

Overall, the book is predictable, but it’s a quick read if you’re looking for something light.

Houston, We Have a Problema was released in December 2008 by Grand Central Publishing.

2 thoughts on “Houston, We Have a Problema”