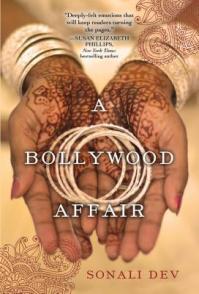 Married off in a mass ceremony at the age of four, Mili Rathod has spent her life waiting for her husband’s return. The two haven’t seen each other since that day twenty years ago, and since then, Mili has lived with her grandmother in a rural Indian village, her future as a wife up in the air. It hasn’t been all bad, though. As a married woman, she’s been able to get away with a lot more than other young women her age; her grandmother even allowed her to attend school in the United States so that she would be a modern, educated wife upon her husband’s return.

Her husband Virat, however, has moved on. How could a marriage his grandfather arranged two decades ago — a marriage between two children, no less — even be legal? Besides, he’s now settled with a baby on the way. His brother, Samir, travels to Michigan to find Mili and get her to sign the papers to formally dissolve the marriage. He’s one of the hottest directors in Bollywood, and he’s used to getting his way. But when he finally encounters Mili, he can’t figure out if she’s extremely naive or an extremely calculating gold-digger who just wants his family’s land in India.

Sonali Dev’s debut is melodramatic and humorous and passionate and at times cheesy, and it is so, so, so much fun. It has the classic bad boy/innocent girl romance novel archetypes, all set within South Asian culture. Mouthwatering descriptions of food abound. Traditional values clash against modern ones. It all makes for a whirlwind, emotionally-charged romance.

While the story arc doesn’t exactly break new ground in the romance genre, everything about this book feels colorful and fresh. My reaction to the book reminds me a lot of my reaction to Ernessa T. Carter’s 32 Candles (and just as with Carter’s book, I don’t know one person who has read A Bollywood Affair and not liked it); it’s always exciting to find a fun new author. Do yourself a favor and pick it up.

A Bollywood Affair was released in October 2014 by Kensington.

4 thoughts on “A Bollywood Affair”