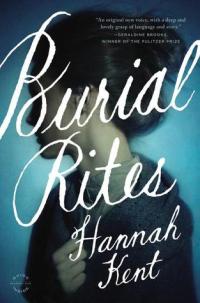 Set in 1829 and based on a true story, Burial Rites follows the story of Agnes Magnúsdóttir, the last woman who was executed in Iceland. Having been convicted of murdering her former master, Natan, Agnes is sent to an isolated farm to await her execution. The family who owns the farm is horrified by this turn of events. Jón Jónsson, the farmer, is resigned to the family’s role, but his wife, Margret, is furious at being forced to risk their daughters’ safety by housing such a woman. As Agnes awaits her execution, she has selected a young priest named Tóti to be her spiritual adviser; no one knows why she has selected such an inexperienced person for the task, especially since she has no previous ties to him.

Margret puts Agnes to work around the farm, keeping a strict and watchful eye on her every move. Agnes willingly and ably follows orders, stopping only when Tóti comes by for their sessions together. Haltingly, Agnes’s life story begins to take shape, and the truth behind her involvement in Natan’s death begins to emerge.

More than anything, Burial Rites is an atmospheric novel. Hannah Kent alternates between different narrators, carefully shaping the reader’s perception of Agnes, but it’s also a very psychological book that feeds off Agnes’s fear and loneliness, as well as the landscape of rural Iceland itself. Regardless of the fact that a family lives on that farm and life is carrying on, for Agnes, it’s cold, desolate, and hopeless. Kent is more than up to the task of creating this punishing environment.

I listened to this one on audiobook, and I highly recommend going that route if only to listen to all of the Icelandic names roll so beautifully off Morven Christie’s tongue. Kent’s writing almost feels deceptively subtle, but on the whole, it’s a quietly powerful book that builds as it goes. You know what’s going to happen — historical record and that title are the ultimate spoilers — but it’s the events leading up to it that stayed with me.

Burial Rites was first published in September 2013 by Little, Brown and Company.