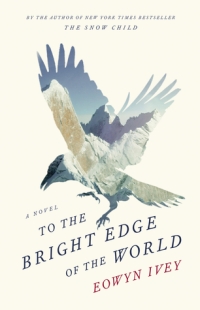 Set mostly in the late nineteenth century, Eowyn Ivey’s latest novel is set in motion when Colonel Allen Forrester receives a commission to go deep into the Alaskan wilderness to find a way north through the Wolverine River. It is a dangerous task that has never been done before, but if he and his tiny crew of men can figure out how to do it, the United States will have access to Alaska’s gold and natural resources.

The group decides to try walking down the river when it’s frozen over, so timing is key. Before they even reach the river, they’ll have to deal with the harsh elements of nature as well as indigenous populations that may or may not be receptive to them. The entire journey could take a year, and Allen is not happy about the prospect of leaving Sophie, his young and newly pregnant wife, for so long. And Sophie, who had originally planned to come along with Allen and see him off at his Alaskan starting point, is disappointed over seeing her one chance for adventure dashed by the pregnancy; instead, she’ll have to embrace domestic life in the Army barracks while she awaits Allen’s return, so she takes up the unladylike hobby of nature photography to distract herself from her other worries.

To the Bright Edge of the World is an epistolary novel that traverses the past and the present. Allen and Sophie’s grand-nephew is at the end of his life and is trying to find a permanent home for his adventurous ancestors’ surviving artifacts. He corresponds back and forth with someone at an Alaskan museum in hopes that an archive can be created. In between these contemporary letters, the story of Allen and Sophie’s year apart takes shape in the form of their personal journal entries from 1885.

I read and adored Ivey’s previous book, The Snow Child, largely in part because of her descriptions of the Alaskan wilderness (Alaska has always been on my bucket list). To the Bright Edge of the World does not disappoint in that regard; Ivey excels at writing about her home state. This book, however, is a lot more grounded in actual historical record (the book is loosely inspired by Lieutenant Henry T. Allen‘s Alaskan expedition). It’s not purely historical fiction, though. Some of those magical elements seen in The Snow Child pop up in her latest book with a few darker and more surrealist twists that are steeped in myth. Ivey leaves it to her readers to determine for themselves what actually happened. It’s different, and I was initially unsure if I was going to like the way the book was set up, but I ended up getting sucked in and reading most of the book in a few sittings.

To the Bright Edge of the World was published on August 2, 2016 by Little, Brown and Company.

2 thoughts on “To the Bright Edge of the World”