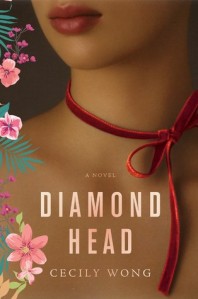 Spanning from China to Hawaii, Cecily Wong’s debut novel, Diamond Head, follows four generations of the Leong family through wars and betrayals. It’s a saga that takes sees the family through the Boxer Rebellion and World War II, one in which people’s fortunes turn around seemingly overnight. The patriarch of the family is Frank, a savvy businessman in China who disapproves of his brother’s radical inclinations and instead favors stability and wealth. The births and subsequent deaths of his infant daughters are an ominous sign, but the birth of his first son signals a change. Eventually, a move to Hawaii offers their small family a new start and wealth beyond their wildest dreams.

When we first meet the Leong family, however, all of this good fortune is long past. Frank has been dead for over two decades, the victim of a mysterious unsolved murder. The women of the Leong family have gathered for a different funeral altogether, and in their mourning, long-held secrets start spilling out.

The family’s secrets are all ominously tied together with a proverbial red string. Everyone grew up hearing the Chinese legend that every man is tied to his destined true love by an invisible red string, though not all people will end up with their true matches:

These knots are passed, from mother to father, from a father to his son. So that the more you lose your way — as the knots gather, as they sprout, the harder you make it for your children to find love, and for theirs after them.

The story of the red string informs major life decisions and occasionally comes back to haunt people; many of the characters had something to say about it, and it provided an interesting recurring theme in the book.

I was a little confused at first; the book jumps back and forth through the decades as well as between characters’ perspectives. Once I found my footing in the story, though, I was mesmerized. I was particularly interested in the Chinese-Hawaiian culture embedded throughout the story. I’ve read other books, both fiction and nonfiction, regarding Japanese migration to Hawaii, but never Chinese, so I loved getting this new (to me) perspective. At its heart, Diamond Head is a lovely and skillfully told story that’s sure to please fans of multigenerational sagas.

Diamond Head was released in April 2015 by Harper Books, an imprint of HarperCollins. This book is on tour right now, so check out what other bloggers are saying about it.