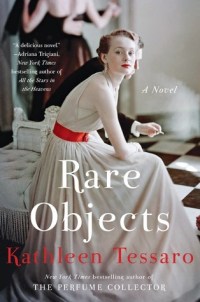 Maeve Fanning and her mother, a widowed Irish immigrant, live in Boston’s impoverished North End. It’s the 1930s and jobs are scarce. Maeve’s mother works long hours as a seamstress and hopes that she’ll one day be promoted to saleswoman, but she knows that’s unlikely; no one would hire an Irish salesperson. As such, all of her hopes are pinned on Maeve to succeed.

A while back, Maeve left her beau and suddenly moved to New York City to start a new life. She tells her mother she’s working for an eccentric millionaire, but the reality couldn’t be further from the truth: she relishes her newfound freedom, develops a taste for the nightlife…and ends up in a psychiatric hospital. She returns to Boston humiliated and determined to keep The Thing that happened in New York a secret.

With the Great Depression worsening, jobs have gotten even more scarce in the North End since Maeve first left. She hears of a job opening at an antiques shop, but she’s in a similar situation as her mother: a high-end shop that caters to Boston’s elite would never hire someone Irish, and Maeve’s name and beautiful red hair are dead giveaways. With a bottle of peroxide, some wardrobe finagling, and considerable pluck, May Fanning now passes herself off as a well-bred woman from Albany. She’s hired, and in the course of her work runs into Diana Van der Laar, a beautiful and troubled socialite who had also been hospitalized in New York. Maeve is terrified about her secret being revealed, but Diana is impishly thrilled. The two settle into a whirlwind friendship, but it’s a high stakes situation for Maeve, who is constantly trying to hide her impoverished Irish roots from her new acquaintances.

I was immediately drawn into the world that Kathleen Tessaro creates. This is historical fiction that’s steeped in details about art and material wealth, but I thought the pacing was spot on. Almost everyone in the book is resting upon a web of stories about their identity; reinvention and desire are central themes. Though the plot itself isn’t the most inventive — I’m sure we can all rattle off a number of books and movies about someone from the wrong side of the tracks mixing in with the rich and powerful — I found myself unable to put the book down.

Rare Objects was released on April 12, 2016 by Harper Books, an imprint of HarperCollins. The book is on tour right now, so be sure to check out what other bloggers are saying about it.