Women’s History Month giveaway: Win a copy of this book! 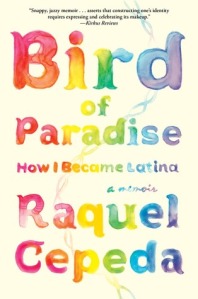 In 2009, as her father’s health took a turn for the worse, Raquel Cepeda realized that she might never get to know her family’s history. Her father recovered, but that seed was planted: she was determined to learn about her ancestry and parse through the painful and often contradictory aspects of her Dominican American background. Race and ethnicity can be touchy subjects for Latin@s, and as Cepeda explores, designations like “black” or “white’ can vary drastically from country to country. Rather than trace her lineage through genealogy, which can only get her so far, Cepeda turns to DNA testing to trace her ancestral roots and figure out how she became the person she is today.

As someone who is also interested in DNA testing for these purposes, I thought Bird of Paradise was fascinating. The first half of the book is more of a straightforward memoir about Cepeda’s youth. She recounts her parents’ whirlwind relationship, which starts out passionate and quickly turns abusive, especially once they move away from family in the Dominican Republic to build a life in New York. Cepeda is born in Harlem, and her youth is a series of upheavals: she’s sent back to the Dominican Republic to be raised by her grandparents. She’s soon brought back to the states to live with her mother, who is by then in a different abusive relationship. The mother and daughter never get along, and ultimately Cepeda is sent to live with her father and stepmother back in New York. Through the years, Cepeda must deal with her father’s violent mood swings. She must also deal with his rejection of their Dominican identity, something she also encounters among her classmates.

Cepeda comes of age in the 1980s and is immersed in hip-hop culture. It is through that music and culture that she begins cultivating her politics and identity. By Part II in the book, she’s a successful journalist with a child of her own. Her father has mellowed, and the two are slowly mending their relationship. She begins exploring her past and hits a number of blocks along the way. The Dominican Republic has had a long, hard history that includes colonization, slavery, and brutal dictatorships. Since much of the country’s records have been lost to the changing regimes, DNA testing seems to be the only option a lot of Dominicans have to explore their ancestry. As Cepeda begins tracing her genetic trail, her journey will take her back to the Dominican Republic as well as different parts of Africa. When she takes history and colonization into account, she’s able to start piecing together a rough idea of her ancestors’ narratives.

It’s an intriguing premise for a memoir, propelled forward by Cepeda’s distinct voice and engaging prose. By the time you reach the book’s ending, you’ll be amazed at the positive ways DNA testing can be used. I loved it.

Bird of Paradise: How I Became Latina was published on March 5. 2013 by Atria Books, an imprint of Simon and Schuster.

In honor of Women’s History Month, Atria was kind enough to provide three copies of Bird of Paradise for a giveaway! To enter, fill out the form below by March 20, 2013 at 11;59 p.m. CT (US only). Good luck!

6 thoughts on “Bird of Paradise: How I Became Latina”